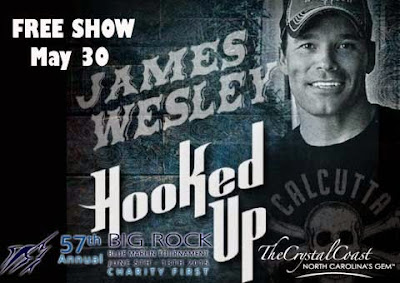 The Big Rock Blue Marlin Tournament is only a few weeks away...June 5th-13th off the beautiful NC Crystal Coast!

The tournament is going to be bigger than ever this year, with a kick off concert May 30th featuring James Wesley!

Listen to Mantel in the Morning beginning Monday, May 18th at 8:10a for your chance to qualify for our weekend getaway on the Crystal Coast!  You'll win an awesome prize pack just for qualifying!

On Friday, May 22nd, one qualifier will win the grand prize...a “Reel Rockin’” getaway to The Crystal Coast, including two-night accommodations courtesy of The Crystal Coast Tourism Authority and VIP passes to the May 30th James Wesley kick-off concert for the 57th Annual Big Rock Blue Marlin Tournament on the Morehead City waterfront!

James Wesley will sing his new single, “Hooked Up,” inspired by anglers who chase blue marlin at the legendary Big Rock off the coast of Morehead City. Plus you'll hear the other songs you already know and love, like "Real" and "Didn't I!'  The concert will be at the NEW Big Rock weigh in station, 710 Evans Street in Morehead City.  It is free and open to the public and begins at 8:30p.

Avid fishers of all ages are invited to retreat to Morehead City, known for the most diverse fishing on the coast, to try their luck at The Crystal Coast’s famous Blue Rock Big Marlin Tournament — offering a variety of events and festivals and hundreds of thousands of dollars in cash and prizes.

Visitors are also encouraged to discover all of The Crystal Coast’s gems, including miles of unspoiled beaches, 85 local dining establishments and rich history steeped in legendary tales of swashbuckling pirate adventure, ghostly encounters and exotic wild horses roaming the shores freely for centuries.

Good luck from the station getting you hooked: Your Country 95.1 WRNS!
Posted by LovinLyrics at 4:14 PM