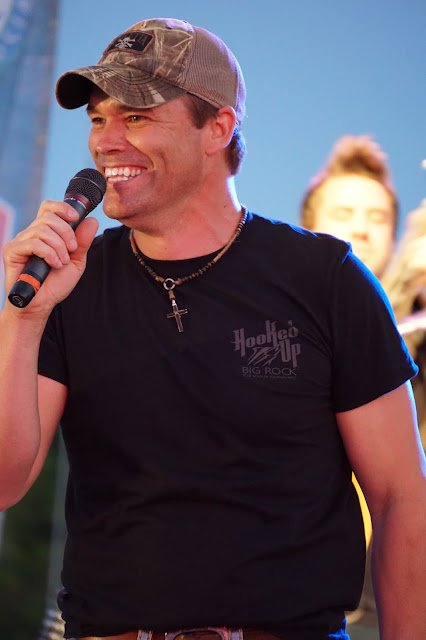 This past Saturday night was a big night in the tiny coastal town of Morehead City, NC. It was the kick off concert for the annual Big Rock Marlin Fishing Tournament featuring James Wesley, who recorded the theme song for the event, "Hooked Up" and was in town filming the music video for the song featuring scenes from his live performance which took place on the Morehead City waterfront at the new Big Rock weigh station and dock. This was really a big event for this town and an even bigger event for James Wesley as an artist. Having struggled to get his music heard for years, having little or no promotion other than word of mouth, he's had 2 hits on the Broken Bow record label with "Real" and "Didn't I" but his biggest hit to date is the connection he's made with the folks at Big Rock and Calcutta Fishing. A virtual unknown to Big Rock and Calcutta, they took a chance on him after seeing that he truly does exemplify what this town and their companies are all about - small town values with big town dreams, family and sportsmanship. James embodies all of those things and from our point of view and from what I have seen over the past few weeks and last night, this was a connection that wasn't by accident, this was by design.

I've been a huge fan of James' since 2010, having seen him perform in downtown Raleigh and being that he's only been this way twice since that performance, I was so excited to see that he had made the connection which would bring him here, to my hometown of little old Morehead City, NC for not only a concert on the water but to film the video to go along with "Hooked Up". No, really I was crazy excited and not in a creepy fan girl way but in a "this is a huge opportunity for James" way. This was going to show people that he's not content to sit on the porch with the puppies but he can get out there and give the big dogs a solid run for their money and boy did he do that! This dog can defnitely hunt!

I arrived on the waterfront for sound check about 4pm on Saturday afternoon and was awestruck at just how big this thing was gonna be. There was a big stage set up on the new dock and huge towers with the James Wesley/ Big Rock / Calcutta Fishing "Hooked Up" logo at each side of the stage. The stage was arranged so attendees weren't land locked, they could also pull up behind the stage by boat and enjoy the show from the water. There were several places to purchase food, merchandise and of course, fishing gear. There were chairs set up for the VIP area and the dock allowed people to bring their own chairs to enjoy the show as well. The sound operators did a fantastic job. Clancy runs the gig and having dealt with him at various shows over the past 4 years in the area, that was no surprise. Big Rock and Calcutta really pulled out the stops for this, making sure James and the band were taken care of in every possible way. I have to say, seeing how these people treated someone that means the world to me not only as an artist but as a friend, really made me proud to say that I live here. That's not an overstatement, that's nothing but truth.

James and the band arrived shortly after we did and took the stage to make sure everything sounded perfect and DAMN did it. It's been at least 2 years since I last saw James perform and I'm pretty sure he had a different band, or at least a member or two were different. He sounded the best I've ever heard and considering he never gives less than his best, well, you get the picture or should I say, the sound. His vocals were deep, crisp and clear and the band rocked. Michael Blakemore, Drew Scheuer, Jesse LaFave, and Neil Alexander are great musicians and some of the nicest guys around. They took time out to pose with fans and have their own time in the sun. After sound check, they all took off to do some last minute preparations and meet and greets before the big show.

At 8pm,  to an enormous crowd of I'd say at least 2,000 if not more, WRNS program director Tommy Garrett came on stage and announced our military who presented the flags while his daughter, Lauren Nicole, beautifully performed the National Anthem. When the anthem was over, we all turned to watch James and the band being brought to the stage on board a gorgeous multi-million dollar Jarrett Bay fishing yacht as the crowd cheered and yelled "James!". It really was an emotional moment seeing the way this crowd was truly interested and excited for him to take the stage. It honestly left a huge lump in my throat. This was his moment, one that's been a long time coming and has been a long time overdue. Tommy led the way for James through the crowd and to the stage. Once James took the stage, it went from being an event to a real connection because that's what James does, he connects with people, not only personally but musically. He doesn't see those supporting him as fans, he seems them as friends and treats them that way, making his shows energetic and crowd interactive. Seeing the looks on the faces of people who were just hearing him for the first time and hearing the comments in the audience made me smile. One lady in front of me asked her friend "Where did this guy come from? He is GREAT! Did you know about him before tonight?" She then immediately pulled up iTunes on her smart phone and began downloading his music. I saw the guy next to me pull up his Facebook page and "like" it. He was also jotting down the names of the songs he was singing.
I can't even tell you how many times I gave people his website address. There were smiles on the kids faces that were in the front row as he looked down at them and would talk to them, sing to them. One little girl to the left of the stage held up her fingers in the shape of a heart for him. (Insert "awwwww" here). James really has a way of making every person feel noticed and important which is something most artists don't take the time to do. Tonight, they noticed back.

The video crew got into place and began filming the "Hooked Up" performance and crowd reaction. The crowd was cheering so loud they had to do it several times. I can't wait to see how the video turns out. They filmed inside the Jarrett Bay Boat "hangar", on the water, in the Red Fish Grill, and many other beautiful places around the coast. It's gonna be great and this is only the start of big things for James Wesley, things that could really catapult him from the space he's occupied for the past few years to many different places and get his name out there where it should be. This is also a great way to build the Big Rock Tournament into an even larger event than it already is and really boost attendance as well as bring a boost to local tourism. What a great night for everyone. Thank you Big Rock, Calcutta Fishing, Jarrett Bay, and everyone else involved for making the night a HUGE success! I hope this winds up being a long lasting relationship!


Find out more about James, Big Rock, Calcutta Fishing, Jarrett Bay and other area businesses at the links below and stay tuned for the premiere of the "Hooked Up" video. We'll post it as soon as we get it! You can purchase "Hooked Up" now on iTunes. Don't forget to leave a review!