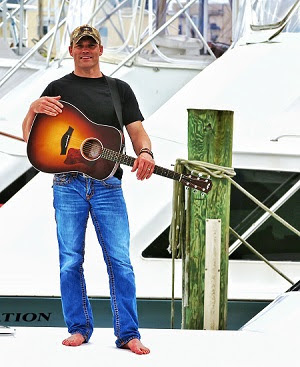 Personal Note from Editor: YES! FINALLY! We are so excited for this premiere and to have been a part of the filming and promotions process. This is a huge deal and accomplishment James and for Morehead City, Big Rock, Calcutta, Todd and Harry! This is the start of BIG things for all of them! Congratulations!
- Jenn

James Wesley’s head-turning talent is winning over Country fans across the nation, hook, line and sinker. After the success of his first two chart-topping singles, “Real” and “Didn’t I,” the Broken Bow Records recording artist will soon debut the video for his latest single “Hooked Up,” in partnership with Calcutta, in an exclusive premiere across CMT platforms on Monday, August 31.

"What an epic video. I am so excited about it,” said Wesley. “It will take you to the outer banks of North Carolina, 50 miles out into the Atlantic Ocean for one of the largest Blue Marlin Fishing Tournaments in the United States, then to the waterfront for a live concert in downtown Morehead City. I am very proud and honored to team up with Calcutta Fishing. It is a privilege to work with such a great group of men and women.”

Co-written by Todd Morris and Harry Smith, the upbeat angler’s anthem tells the story of a blue marlin who is being pursued by fisherman at the Big Rock, a legendary fishing spot off the coast of Morehead City, NC. An avid sportsman himself, Wesley identified with the song and was eager to record it. Announced in April, Wesley formed a partnership with Calcutta to shoot the “Hooked Up” music video and promote the song to the sport fishing communities.

“Partnering with James and ‘Hooked Up’ is a perfect fit for Calcutta,” said Dave Martin, division president of Fishing/Camping/Marine at Big Rock Sports. “In addition to being the major sponsor of the Big Rock Blue Marlin Tournament, Calcutta is the premier brand for the coastal lifestyle.”

For each “Hooked Up” single downloaded from iTunes, proceeds will go to support the American Sport fishing Association’s “Keep America Fishing Program” and the Big Rock Blue Marlin Tournament Charities. Both charities promote sport fishing, and help to keep oceans, lakes, rivers and streams open, clean and abundant with fish.

Posted by LovinLyrics at 3:57 PM