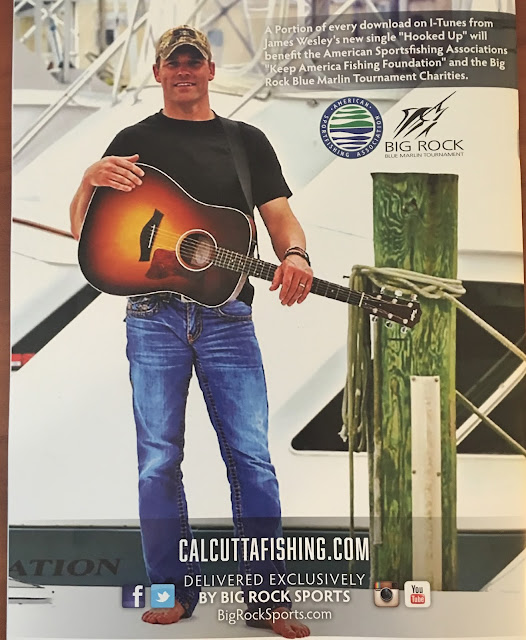 One of country music's favorite new rising stars, Broken Bow recording artist James Wesley, has hooked the deal of a lifetime, representing one of the country's largest and most well respected outdoor sports companies, Big Rock Sports, their private label brand, Calcutta Fishing and the Big Rock Fishing Tournament (which, though not directly affiliated with Big Rock Sports, Calcutta Fishing is one of their largest sponsors.) The focus of the Big Rock Tournament is giving back through their events and giving back to community is something James Wesley holds close to his heart.

The Kansas native first made his impression with country music fans upon the release of his 2010 hit, "Real", which hit #22 on the Billboard Hot Country Songs chart and his follow up songs, "Didn't I" and "Thank a Farmer", selling out shows across the country and he's toured with Taylor Swift and Ronnie Dunn. In 2014, James Wesley gave his time as part of a benefit to help rebuild the Korona Family Dairy Farm after it burned to the ground. Stanley Korona Sr. who’d been farming on the land for over 50 years, lost all of the milking equipment, supplies, and the property’s well. James has always been there for the everyday folk, those who live from check to check, the "real" people. 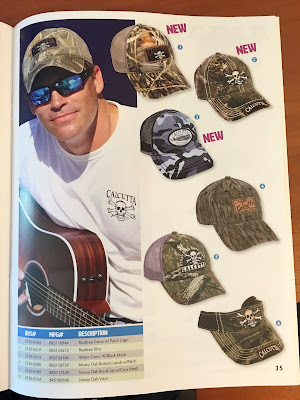 Now James has made his way from Kansas, via Nashville, to the small eastern North Carolina waterfront town of Morehead City. home of the Big Rock, one of the world's largest and most well known sport fishing tournaments. James, being the quintessential country boy, made the right connection with the tournament and reeled in a collaboration with writer, Harry Smith, the theme song for the tournament, "Hooked Up", an upbeat song sung from the perspective of the marlin who is being pursued by Big Rock Tournament entrants through the blue waters off the crystal coast. The song was such a hit with Big Rock and it's customers that the next obvious step was to create a video for the single. The video shoot was held in May on the Morehead City waterfront at Big Rock Landing and drew thousands, not only locals but from surrounding NC cities as well. The video focuses on the beauty of the NC coast, the town of Morehead City, the thrill of the chase and trying to land the big one to bring home the Big Rock Tournament prize. The song and video are now featured nationwide at Big Rock events and on various music outlets such as CMT and Zuus Country. A portion of every download of the "Hooked Up" single on iTunes benefits the American Sportsfishing Association's "Keep America Fishing Foundation" and the various other Big Rock Tournament Charities.

James is featured in the 2016 Big Rock Sports catalog which is distributed nationwide to customer, vendors and events. The catalog features the best of Calcutta Fishing men and ladies apparel, top quality sunglasses, footwear, belts, caps, gear bags, waders, rain gear, folding chairs, dive gear, accessories and more! Big Rock and Calcutta are two of the world's premiere brands and to see that they've hand picked James to represent their line and what they stand for, well, there couldn't be a better, more appropriate pairing even if you tried. Thanks to everyone who has supported this project and made it a reality. It's a great thing for this community and a huge part of the continued success coming down the pipe for James!

(P.S. - James is kind of a country music hero around here, Morehead City can't get enough of this guy! His shows are consistent sell outs and the meet and greets are always packed! People love him. Just ask anyone!) 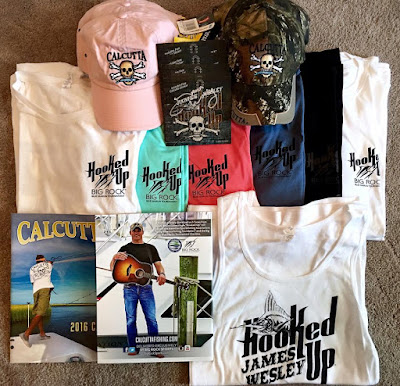 Download your copy of "Hooked Up" and support Big Rock charities. Give back just as the music gives back to us every day and get a great song to add to your playlist! Stay tuned to our social media pages for a contest to win items shown above!