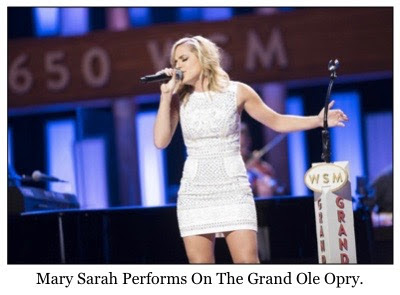 Mary Sarah, who recently turned 21, belongs to two pretty exclusive clubs, making her perhaps one of the few artists who can claim membership in both. This spring, she advanced to the Top 5 in the latest season of NBC’s The Voice, which won its second consecutive Emmy for Reality-Competition Program this past Sunday. Shortly after she was voted off in May, she got the call that most country singers can only dream about: to perform onstage at the Grand Ole Opry, the 89-year-old Nashville institution known as the Mother Church of Country Music. She’s now done it three times, and admits the initial nerves she felt at her Opry debut have receded somewhat.

“There’s nothing like being on that  stage,” says Sarah, who was born in Oklahoma but grew up mostly in Fort Bend County. “So I still get nervous but...it’s not nervous. Larry Gatlin told me, ‘It’s not nerves, it’s excitement.’ [That’s] what takes over you at  the Opry. So I get really, really, really excited [laughs]. It has gotten a little easier as we’ve got on, but it’s still — like I said, it’s still the Opry.”

The reason Sarah has the likes of Larry Gatlin giving her advice is that despite her youth, she’s known many such old-school Opry types for a while now. Released the day before her 19th birthday,  her most recent album, 2014’s Bridges, features Sarah more than holding her own with a virtual Rushmore of country-music greats, including the since-deceased Merle Haggard and Ray Price. Other partners include Willie Nelson, Vince Gill, Tanya Tucker, Lynn Anderson (“Rose Garden”) and her early benefactors the Oak Ridge Boys, one of whom had heard her sing on YouTube and reached out on Twitter. Sarah herself has been in show business since she joined preteen pop troupe Kidz Bop at age ten, but she says Dolly Parton, whose haunting duet on “Jolene” kicks off Bridges in style, left the deepest impression during those sessions.

“The one thing I learned without her even saying it, by just kind of watching her, was how real she is; how she knows how to make somebody feel so special,” Sarah says. “I feel like with her name, Dolly Parton, you could go two ways with the fame that comes with that. You could either let it go to your head or you could take it and use it in a positive way, and that’s exactly what she does.

“I walked into the room, I was like so nervous, and then all of a sudden she starts talking and you feel like you’ve been friends forever,” she continues. “She has a way of doing that to everyone. It’s definitely a gift.”

Parton was in fact the first star to come aboard the project, and Bridges drew widespread acclaim from the likes of The New York Times, Rolling Stone Country, and numerous other outlets. When the tour was up, Sarah returned to Nashville, where she had moved with most of her family after graduating from Richmond’s Foster High School. In a 40-minute phone conversation earlier this month from her home, Sarah talks like a young person, self-confident and staccato, her sentences full of enthusiastic words like “crazy” and “amazing” and “gigantor.” She likens her audition for The Voice, where she sang another favorite from Bridges, the Connie Francis weeper “Where the Boys Are,” to a video game, “like ‘Wii Sing’ or something.” (This does exist, btw.) Showbiz credentials notwithstanding, she also displays a preternatural amount of poise for someone still so young, which no doubt also served her well in the pressure-cooker atmosphere of reality TV.

Although Sarah says she never watched much of Voice competitors like American Idol or America’s Got Talent, she does admit to being drawn in by the NBC show’s emphasis on pure singing skills. She survived the early rounds and into the knockout phase, charming both judges and audience with a savvy mixture of vintage-country classics (“Stand By Your Man,” “Rose Garden,” “You Ain’t Woman Enough”) and more contemporary fare (“My Church,” “Johnny and June”). While bonding with her castmates, who were often sequestered in their hotel on their days off with only each other for company, Sarah advanced far enough that she admits she allowed herself to entertain the thought that she might actually win the whole thing.

“One of the biggest things I feel like I had to overcome was just the pressure of being perfect,” she says. “Several times I just sat in my hotel room and it just hit me, like, ‘What am I doing? Why am I putting so much pressure on myself?’ Because I totally believe that what happens is gonna happen, and it’s gonna happen the way it’s supposed to. So it’s either you can sit back and enjoy it, or you can literally freak out all the time. But it’s still going to happen the same way. It’s inevitable. So I always did my best, but I never tried to put too much pressure on [myself].”

Alas, it was not to be. Sarah faced elimination after her version of Randy Travis’ “I Told You So,” and her performance of Carrie Underwood’s “Something In the Water” in the show’s “Instant Save” round was not enough to persuade Voice viewers to let her continue. But as quoted in tasteofcountry.com, Sarah’s coach Blake Shelton couldn’t say enough good things about the young singer’s potential.

“I’m just saying no matter what happens here tonight, when you go back to Nashville, you’re going to find there’s a big giant door open for you there and that makes me very happy for you, Mary Sarah,” Shelton said.


Despite such ringing endorsements, or having a legend-packed album like Bridges under her belt, or that she’s still so young that she’s still getting used to being able to spend Friday and Saturday night on the town instead of staying home (because that was just a few months ago), Sarah knows what she’s up against. To put it kindly, modern country radio offers a less than hospitable climate for up-and-coming female artists, even those who have appeared on The Voice, and especially those whose own voice evokes a more traditional sound. But Mary Sarah has been working with Nashville songwriter and producer (and fellow Texan) Bart Butler, who has had some recent radio success with neo-honky-tonker Jon Pardi. For now she plans to keep writing, learning her craft, and doing her best to stay positive. It’s taken her this far.

“Right now my main goal has just been to write what I love, because when I think about the legends that I worked with, Willie Nelson, Merle Haggard, Ray Price — I mean, I don’t think they were ever listening to radio going, ‘We need to sound like this,’ Sarah says. “They were living on houseboats, drinking and smoking and writing whatever the heck they wanted to write, and it turned out to be great.

“If what I write isn’t what people want to hear, that’s OK, but there are people who want to,” she continues. “So my goal is just to be happy with what I do and what I love to do, and share it with other people.”
Posted by LovinLyrics at 1:52 PM