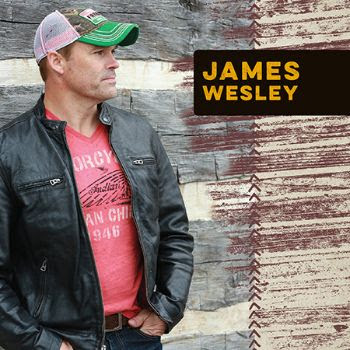 Traditional Country music performer and songwriter, James Wesley has announced the release of the lyric video for the lead single "Running,” off his long awaited self-titled EP. The song, written by James Wesley, Marcum Stewart and Zac Wrixon, depics the emotions of moving on from a broken relationship. "Running" was recently named One of ‘Ten Best Country and Americana Songs To Hear Now’ By Rolling Stone Country. The five original songs on the EP are available for streaming and download on all online platforms here.

“I am so excited to share the lyric video for the new single, "Running," expressed James Wesley. “This song is about a man that is trying to outrun her memory, but no matter where he goes or how far he may run, he just can’t shake it. I feel so many of us can relate to this video and song, because we have all had relationships where we have tried to outrun them physically and mentally just to move on with our lives and yet, there are days that those memories catch up to us. Moving on is the best thing we can do even though it may be hard. We just have to know and trust that God has a better plan for us.”


"You Should Be Here With Me" - Rodney Clawson, Andrew Dorff and Jon McElroy


"The You I Wanna Know" - Tim James, Wade Kirby and James Wesley Prosser


"Do What I Gotta Do" - Mike McQueery, Mark Nesler and James Wesley Prosser

For more info, go to jameswesleymusic.com
Posted by LovinLyrics at 10:37 AM