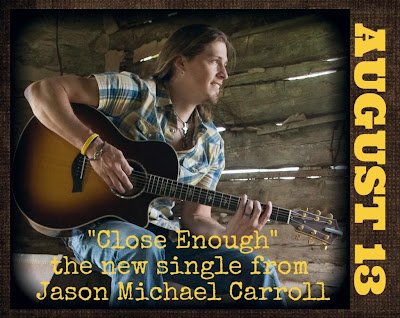 Two weeks from Tuesday, on August 13th, the brand new single from Jason Michael Carroll, "Close Enough", is officially going out to country radio. Let's pull together as supporters and friends of Jason, who is an amazing artist, person and make sure he gets the attention he deserves with this new song. This song has hit potential with the right push. When you start requesting it on your local stations starting August 13, a few things to keep in mind in order to make this a successful campaign:

2.) BE KIND - When requesting, if you're told no or "we don't have it", please don't take out frustrations on the dj. They are told what they can and can't play and if a new song is being requested, they haven't been given the thumbs up yet from management or they don't have the song yet. Thank them and move on.

3.) DO NOT contact program directors unless you know them personally or have been given permission from Jason or his management. Program directors and general managers should ONLY be contacted by the artist or an official representative of that artist. They only set aside a few hours a day to discuss new music with official representives (A&R people, promotions, management, etc). If they are on the phone with a fan, this ties up their time that they could be using to speak with the people they should be talking to.) Once you get on a PD or GM's bad side, that can definitely affect the outcome of what we're trying to do.

4.) Only use designated listener and request avenues such as posted request phone lines, email addresses, Twitter or Facebook pages, etc. These are there for YOU, the listener, to make your voice heard. Use them, but don't OVERUSE them. You don't want to make the station tired of the song before they even get it. Request the song regularly, but don't oversaturate the station with requests, especially by the same people over and over. They do catch on and trust me, they will let you know if you're overdoing it. That has the opposite effect of what we're trying to achieve.

5.) If a station does play it, either from your request, or you happen to hear it being played, SAY THANK YOU and TAKE NOTE OF THE STATION so we can let management know and they can thank them and fans can also let them know they appreciate it by promoting that station on social media. Always be sure to give back.

6.) And most of all, TALK ABOUT IT. Promote it on your social media pages, tweet about it, Facebook about it, Google Plus about it, Linked In about it, Myspace about it. If you have a blog, blog about it. Don't be afraid to tell people why you love the song and why you think Jason is a great artist who deserves the attention. Remember, not everyone is going to love the song and that's fine. We're all entitled to our opinions. Always show respect to other fans, even when you disagree. Remember, in a way, you are representing Jason in an "unofficial" manner and the way you deal with other fans reflects on him. Honky Tonk Friends are known for their dedication, kindness, respect and strength in numbers. So speak up, stand up and make a difference!

That being said, let's not just settle for a spark with this single, you've waited long enough and should be ready to start a fire. Let's show what the power of people who stand behind and believe in an artist can do. Your voice does make a difference.

Below are a couple of tools to help you with your promotion campaign:

Radio Locator : Here is the contact information for country stations in your area

Online Mediabase Request Forms: These are request forms for FAN use. Don't be afraid to use them. Find your closest reporting station and look on the form to see if "Close Enough" is listed as a song choice. If so, simply mark it and submit the form according to the station's directions. If the song is NOT listed, there should be a space near the bottom of the form to manually fill in the song title and artist name. These are usually checked once or twice a day. Please don't OVERUSE these forms either. One or two submissions a week is plenty!
Posted by LovinLyrics at 1:39 AM