THE LACS SET TO RELEASE 3RD STUDIO ALBUM, "KEEP IT REDNECK", ON AUGUST 20 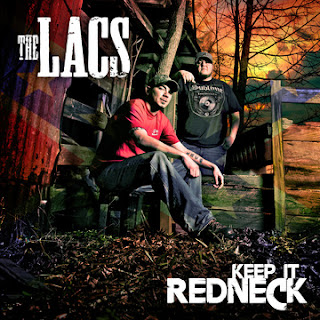 NASHVILLE, TN (July 25, 2013) – Country duo, The LACS’, third studio album, “Keep It Redneck,” hits shelves August 20, and not a day too soon for legions of loyal fans who can’t seem to get enough of “them LACS boys.” Produced by Shannon “Fat Shan” Houchins and Phivestarr Productions for BackRoad Records, “Keep It Redneck,” is available for preorder on iTunes next Tuesday, July 30.  Watch the trailer for the music video here.
The LACS, made up of Clay Sharpe and Brian King, recently celebrated national recognition with a major cover story in the “Arena” section of the Wall Street Journal which focused on their unique ability to connect with fans at their live shows and with their recorded music.  Fan demand has fueled album sales to just over 200,000 albums to date, and positioned the duo on Billboard’s Country Albums chart for an incredible 68 straight weeks for their previous album, “190 Proof.”
“The LACS have grown exponentially in the past couple of years and are poised to grow even more with the release of “Keep It Redneck,” says Shannon Houchins, CEO of Average Joes Entertainment. “They know and understand the importance of giving their fan base what they want musically and do exactly that with this new album.”
Key songs include the title track, “Keep It Redneck;” a play-it-loud and proud new song which proclaims the importance of staying true to your roots, incorporating crunchy riffs and the bounce that LACS fans love.  "Relacs" introduces Season 12 American Idol contestant, Sarah Ross, on this fun, beach-themed, summertime song.  Reminiscent of Colt Ford's smash hit, "Dirt Road Anthem," the radio friendly, "Kick Dust," has a message that resonates with every fan - getting away from life and hitting the back roads.  Another key track certain to become the "Field Party" anthem of the year, Colt Ford and newcomer JJ Lawhorn join the LACS rockin' out the "Field Party.”  Other tracks to watch for include "Smoke Stack," one that will make mud-boggers and diesel-drivers proud, and “She’s Runnin’,” the tale of love gone wrong – LACS style.
“Keep It Redneck,” in true LACS fashion, fuses musical genres and epitomizes the new sound in country music which they have helped to originate.
Track Listing:
1)  Keep It Redneck
2)  Kick Dust f/ Noah Gordon
3)  Great Moments In Redneck History #3 (skit)
4)  Shichya
5)  Make Things Right
6)  Smoke Stack
7)  Rusty's Junk Shack (skit)
8)  Empties
9)  Get Lost
10)  All Weekend Long
11)  ReLacs f/ Sarah Ross
12)  She's Runnin'
13)  Memory
14) Tylenol
15)  Field Party (Remix) f/ JJ Lawhorn and Colt Ford
16)  Kickin' Up Mud (2013)

Posted by LovinLyrics at 2:34 PM