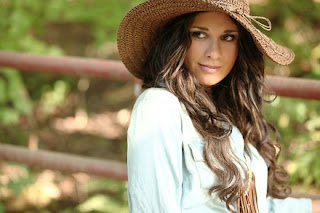 Discusses Inspiration Behind The Song

(Nashville, Tenn. – August 20, 2013) A-OK Entertainment/GMV Nashville recording artist Amber Hayes has garnered a Top 40 on the MusicRow Country Breakout chart with her current single “Any Day Is A Good Day.” The uplifting track, which is a lyrical reminder to not take anything for granted and to live life to the fullest, has been on a steady climb and continues to receive positive reviews from listeners and critics alike.

“Country hotshot Hayes is full of wide-eyed optimism on her latest single, which may prove to be her breakout.” – Jill Menze, Billboard Magazine

“Simply lovely. Her sweetly wistful singing voice is perfectly framed by an airy production and pristinely placed harmony vocals. Plus, it has a message to warm your soul. I could definitely get used to listening to this wafting through the radio speakers.” - Robert Oermann, MusicRow Magazine

“That love for what she does sparkles through in her sophomore release, "Any Day Is A Good Day.” - Chuck Dauphin, Billboard.com’s 615 Spotlight

During the time in which Hayes was writing and recording for the new project, there were a series of people that entered her life that she feels are the key inspiration behind the music, more specifically for the single “Any Day Is A Good Day.”

Hayes explains, “A family that I got to know, who is located in Nashville, has a little girl who was 4 at the time that was diagnosed with a rare eye cancer, called Retinoblastoma. Throughout the time in which she underwent treatment, the bravery she and her family showed was remarkable and truly inspiring. In addition, my good friend, Kevin Turner, who many may recall as the ex-Alabama and NFL fullback, was encountering new challenges and struggles every day because of his diagnosis, Amyotrophic Lateral Sclerosis (ALS), also known as Lou Gehrig’s Disease. I had all these different people coming into my life that I felt were in need of hope and uplifting. At a time, when even words couldn’t fully heal the pain and sorrow these families had, all I knew what to do was write and sing for them. My 96-year-old great grandmother always said, ‘Any day that I can put my feet on the ground, is a good day’ and I like to think that these people that came into my life at that particular time, along with my nannie’s wisdom is what inspired me to record the music as well as providing me the emotion to sing them and truly mean every word.”

While in the studio singing the vocals for “Any Day Is A Good Day” Amber received a message from a dear friend that the doctors reported she was cancer-free, making the day not just a good day, but a great day.

Hayes is also being recognized for her music through various television and film placement opportunities. In 2012, the multi-talented performer starred in the major motion picture, “Cowgirls N’ Angels.” Three of her songs made it into the film, including her duet with Lonestar’s Richie McDonald, “Always There For Me.” Hayes’ music was also featured in four episodes of the hit CW television series, Hart of Dixie.

Hayes first broke onto the Country music scene after her starring role as Kathy T witty in the 2008 Conway Twitty musical, It’s Only Make Believe. In October 2012, she released her sophomore album, Any Day Is A Good Day, which is available at iTunes and Amazon. Earlier this year, Billboard’s The 615 named her as “One To Watch in 2013.” Following that, she opened up for one of her biggest musical influences, Reba McEntire, in Durant, Oklahoma.