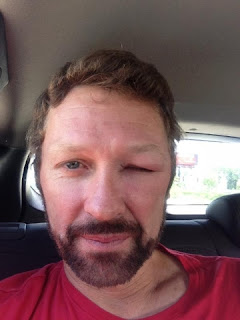 Nashville, TN...(August 15, 2013)... Craig Morgan continues to put his fans first in sharing his excitement over the new single “Wake Up Lovin’ You” by releasing the brand new music video directly to them via YouTube yesterday. The angst-ridden clip for the song is made all the more intense due to a swollen eye the singer received after being stung by a bee. Director Kristin Barlowe and Morgan quickly changed their shoot strategy to mask the sting and, ironically, the injury adds to the raw emotion of the song.


“Wake Up Lovin’ You” can be found on his upcoming CD, THE JOURNEY (LIVIN’ HITS), set for release on September 3. Fans may now PRE-ORDER limited edition packages exclusively from www.craigmorgan.com.

Craig recently gave his fans the first look at The Journey in July by revealing information about the project during a live Facebook digital fan press conference. Fans joining him on his page were the first to see the new album cover and got the exclusive chance to participate in a live Q&A with Craig.

"I’m so excited about the new music," shares Craig. "You can listen to this record and join me on the journey from where I’ve been to where I’m headed. I think we’ve put together a really great album with new music that looks ahead to the future as well as some of the fan-favorite songs that speak to who I am at my core and what my fans love in my live shows.”

“Wake Up Lovin’ You” is grabbing immediate attention for Craig’s “electrifying performance” (Music Row) and is being called “one of the best of his career” (Roughstock). Fans may pre-order the album at www.craigmorgan.com or download the single now on iTunes, Amazon and other digital outlets.

11. “That's What I Love About Sunday” (Adam Dorsey, Mark Narmore)