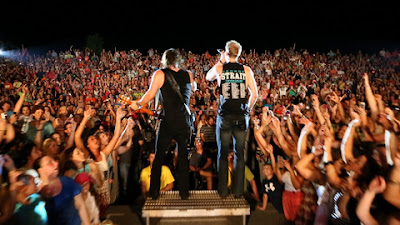 Nashville, TN (August 27, 2013) – Florida Georgia Line will perform songs from their PLATINUM-certified debut album HERE’S TO THE GOOD TIMES (Republic Nashville) during TODAY’s TOYOTA SUMMER CONCERT SERIES, airing next Monday (9/2) on NBC beginning at 7:00A in all time zones. Comprised of Tyler Hubbard (Monroe, Georgia) and Brian Kelley (Ormond Beach, Florida), the hot duo’s high-energy set will include their GOLD-certified, Top 5 hit “Round Here” and a collaboration with Nelly on the 5X PLATINUM “Cruise” Remix, which has sold over 5.5 million downloads. Breaking the record for longest #1 on Billboard’s Hot Country Songs Chart, “Cruise” is the third-best-selling Country digital song ever, according to SoundScan.

Fans are invited to the live show at Rockefeller Plaza (49th Street) in New York and should arrive by 6:00A for a prime viewing spot. Use #FGLNellyTODAY to join the party online.

With back-to-back, multi-week #1 smashes in the US and Canada – breakout debut single and PLATINUM-certified follow-up “Get Your Shine On” – multiple ACM and CMT Music Awards and several TEEN CHOICE nominations, the duo has continued to amass accolade after accolade.

In advance of their first headlining run this Fall, HERE’S TO THE GOOD TIMES TOUR 2013, FGL can now add a string of broken attendance records to the list of career milestones. From sold-out shows across the country in Los Angeles to New York, the sizzling duo is on fire.