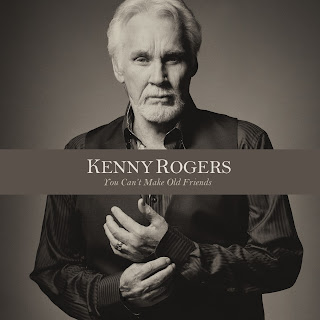 NASHVILLE, Tenn., September 3, 2013 – With an astonishing recording career that now spans over seven decades, you would think music legend Kenny Rogers had already accomplished it all. However, you’d be wrong.

Rogers returns with You Can’t Make Old Friends on October 8th via Warner Bros. Records, proving – once again – that he still has plenty to say. The album reunites Rogers with long-time friend and collaborator, Dolly Parton, for a brand new duet on the title track, “You Can’t Make Old Friends.” It was thirty years ago almost to the day when Kenny and Dolly released “Islands In The Stream,” which went on to become an instant classic and one of the most successful singles by a duo in history.

"What a thrill it was for me to work again with my buddy, Dolly Parton, and what a special song,” remarked Rogers. “Working with Dolly is always a little like going home. Everything felt comfortable."

With a collaboration of producers, including Kyle Lehning, Warren Hartman, and Dann Huff, You Can’t Make Old Friends is Rogers’ first country album since the release of Water & Bridges in 2006. Rogers considers this upcoming release the most varied and complete album of his lifetime.

"I can honestly say this may be the best album I've ever recorded,” added Rogers. “The musical diversity is extraordinary. It goes from songs I would normally sing, to songs I would normally never even listen to. In this business, you do albums to both grow artistically, and for the sheer love of music. We chose what I think are the most diverse and best songs I've ever had access to."

You Can't Make Old Friends showcases a certain familiarity that can be expected from Rogers, along with fresh twists of creativity that see the versatile Grammy Award-winner stretching his artistry into new musical territory. In addition to the great story songs and love songs Rogers has become well known for, flavors of rock and roll, soul, gospel, southern rock, zydeco, and sounds of the Southwest are embraced in this bold recording.

The digital download of You Can’t Make Old Friends is available for the very first time today on iTunes here: http://smarturl.it/kennyrogers. Customers who pre-order the new album on iTunes will also receive an instant download of the “You Can’t Make Old Friends” duet. Special pre-sale bundles, including a physical copy of the CD, are being offered at www.kennyrogers.com.

Kenny Rogers has already had a massive year in 2013, including the announcement of his induction into the Country Music Hall of Fame this fall. Rogers also performed on the main stage at this year’s Glastonbury Festival to a colossal audience on the grounds and around the UK as it was televised on BBC. His Through The Years World Tour has included stops in Morocco, England, Scotland, Wales, Ireland, Switzerland, Canada and the U.S.

This fall and winter, Rogers’ tour will roll on with more U.S. and Canadian dates, including the Christmas & Hits Through The Years Tour, his annual holiday performances, in late November and December. In addition, a novel Rogers co-wrote with Mike Blakely, What Are The Chances, is being released today (September 3rd) and Rogers’ New York Times Best Selling autobiography, Luck Or Something Like It, will be released in paperback on September 27th.

A trailblazing recording artist, vocalist, and entertainer, Rogers has sold more than 120 million records worldwide and recorded more than 65 albums during his illustrious 56 years in show business. Rogers has charted a record within each of the last seven decades and scored a hit single in the past six. He was the first country artist to consistently sell out arenas and quickly became a pop superstar as well – his 28 Billboard Adult Contemporary Top 10's is fourth-best all time among men, trailing only Elton John, Neil Diamond, and Elvis Presley. Rogers has recorded 12 No. 1 albums and 24 No. 1 hits – “The Gambler,” “Lady,” “Lucille,” “Coward Of The County,” “She Believes in Me,” “Islands in the Stream” (with Dolly Parton) and “Every Time Two Fools Collide” (with Dottie West) among them. His Greatest Hits album has sold over 24 million copies worldwide to date. He is the RIAA’s 8th best-selling male artist of all time with one Diamond album, 19 Platinum albums and 31 Gold albums.

5. Turn This World Around

6. Dreams Of The San Joaquin

7. Don’t Leave Me In The Night Time (Featuring Buckwheat Zydeco)

10. When You Love Someone