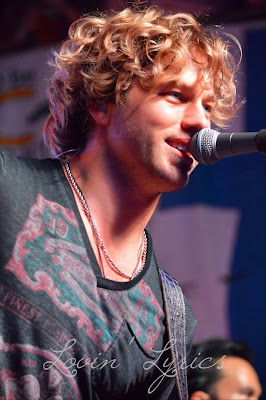 VOTE NOW FOR THE ACA AWARDS

Finally! Casey James is getting some recognition for his music, not just his curls and blue eyes. From the first time he grabbed America's attention as the "curly haired guitar player" from Texas on American Idol , he's shown the music world that he's got much more to offer than boyish charm and good looks, he's got skill and mad game. Right out of the gate, his debut single, the sexy come on ballad, "Let's Don't Call It A Night", took off like a bullet and landed a spot in the 20's on the charts and came packaged with a video that became a hit on GAC and CMT. Casey's second single, "Crying on a Suitcase", was another immediate smash hit and again, found it's home in the 20's on the charts and resulted in mass radio airplay. The video, like it's predecessor, found a home on CMT and GAC as one of the most played and top requested videos. Make no mistake, Casey James is here for the long haul.

Just a little background on Casey for those of you who may not be familiar with his story or his music ... he started playing the guitar at the age of 13 and within a year was actually performing on stage. Tragedy struck when Casey was 21 in the form of a serious motorcycle accident that nearly took his life. Told he would no longer be able to play guitar, Casey proved the doctors wrong and came back stronger and better than before the accident. In 2009, Casey tried out for American Idol Season 9 and in May 2010, finished in the Top 3. Casey's American Idol run gave birth to the Casey James Fan Club. These fans are some of the most rabid, dedicated fans I've ever had the pleasure of dealing with. As someone who loves seeing artists get honest appreciation for what they do, they don't come much better than this group of people. They're not afraid to stand up and speak out for Casey, his music and things they think should be brought to the attention of whoever will listen. Sometimes it's fans like this who help an artist gain their recognition, even more than any label/management or public relations representative can. Fans are better than any press release to let you know what's going on in their favorite artist's world. Casey James fans know this and excel at it.

I have to say, I had seen Casey on American Idol, heard his music and knew he was good, but until I saw him perform live in Raleigh, NC last weekend, I didn't know that he isn't just good, he's outstanding. I've never seen anyone shred a guitar like him and I swear he left shards of wood and pieces of strings on the stage when he left. His show was one of the most energetic I've ever seen, he was climbing on the speakers, bouncing around the stage, and making personal contact with those in the audience. His voice was spot on with a hint of a back country gravel road, grit and a Texas growl that honestly made my knees a little weak. Good music always makes my knees weak and this was good music.

Casey has been nominated for the fan voted American Country Awards for New Artist Video of the Year for "Crying on a Suitcase". Again, this is a FAN VOTED award so if Casey's fans have anything to say about it, he'll be up on that stage with his acceptance speech. Congratulations Casey on the nomination and I know your fans will be on the edge of their seats waiting to see you hold up that award at the end of the night.

GET YOUR VOTE IN AND MAKE YOUR VOICE HEARD!

Posted by LovinLyrics at 7:10 PM

Thank you so very much for your support! For Casey to "break out", he needs more and more recognition/credit for what he does. He is talented, handsome & humble. A rare find anywhere. Especially Nashville. Lets put him on the map. He deserves it.

Thanks sooo much for your article on Casey!! He is so talented and deserves the recognition! I have seen him perform and he is an awesome musician and the most humble guy you could ever meet! God Bless him!

thank you for writing about casey's great talent, i am so anxious for everytone to discover him. he is a great performer!

To see Casey perform live is an experience that leaves one stunned, breathless and addicted to seeing him perform again and again. As a former "flower child" I don't expect to find that rare, organic, musical genius that was prolific in the 60's. Then Casey James stepped onto a stage! WOW! Thanks for this article. He really does deserve stardom. He is a gift and we are blessed that he's here to share it!

I was also at the show at City Limits Saloon in Raleigh (my 28th Casey James show) and he was amazing as usual! He is a very talented singer/songwriter & musician, I never get tired of hearing his live shows. Thank you for coming out to see him and writing about his performance, he is very deserving of an ACA Award!

I was first a fan of Casey on American Idol. Then, I saw him in Jonesboro, AR in Sept 2013. He is an amazing performer and even better person. He is a Man that honors his family and his God.