Multiple CMA, AMA & ACA Nominees Reveal Track List For HERE’S TO THE GOOD TIMES…THIS IS HOW WE ROLL 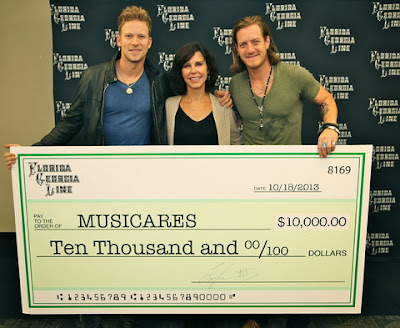 
NASHVILLE, TN (October 31, 2013) – Prior to a recent tour stop at the Bridgestone Arena in Nashville, Florida Georgia Line presented MusiCares®, which helps provide medical and financial assistance to music community members in need, with a $10,000 donation to aid in their efforts.

"We first learned about the program when we visited the offices of The Recording Academy® in LA and were completely blown away by what the organization does to help support our music community," shares FGL's Brian Kelley. "We couldn't think of a better way to show our support." FGL's Tyler Hubbard adds, "This year has been full of amazing blessings for us and we are so thankful to be able to give back and show our gratitude."

On 11/25, FGL will release HERE’S TO THE GOOD TIMES…THIS IS HOW WE ROLL, a deluxe CD/DVD version of their Republic Nashville chart-topping debut, which produced three consecutive, multi-week #1 smashes in the US and Canada – GOLD-certified “Round Here,” PLATINUM-certified “Get Your Shine On” and MULTI-PLATINUM “Cruise” – and their Top 20-and-climbing single “Stay.” The enhanced project will include five new songs, the buzzed about “Cruise” (Remix) featuring Nelly and a look at the making of the album, in addition to all official music videos with behind-the-scenes footage – “Cruise” directed by Brian Lazzaro, “Cruise” (Remix) featuring Nelly directed by Marc Klasfeld, “Get Your Shine On” directed by Declan Whitebloom, “Round Here” and “Stay” directed by Peter Zavadil – and the unreleased video for “It’z Just What We Do,” directed by Michael Monaco. Co-writer Luke Bryan, who the hot duo opened for on his DIRT ROAD DIARIES TOUR, is featured on the title track “This Is How We Roll.”

In the last year, FGL has sold more than 10 million tracks worldwide from their debut album, which has been certified PLATINUM in the US and GOLD in Canada. Their massive hit “Cruise” has broken the record for longest #1 on Billboard’s Hot Country Songs Chart and sold over 6 million downloads in the US alone to become the second best-selling Country single ever, according to SoundScan. FGL has also become the only artist in history to join Brooks & Dunn in having their first three singles hit #1 for multiple weeks each.

Established in 1989 by The Recording Academy, MusiCares provides a safety net of critical assistance for music people in times of need. MusiCares' services and resources cover a wide range of financial, medical and personal emergencies, and each case is treated with integrity and confidentiality. MusiCares also focuses the resources and attention of the music industry on human service issues that directly impact the health and welfare of the music community. For more information, please visit www.musicares.org. For breaking news and exclusive content, please like "MusiCares" on Facebook at www.facebook.com/musicares, follow MusiCares on Twitter @MusiCares at www.twitter.com/musicares, and join us on Instagram at www.instagram.com/musicares.

Posted by LovinLyrics at 4:00 PM