Deluxe Edition of DAYS OF GOLD To Release Exclusively at Target 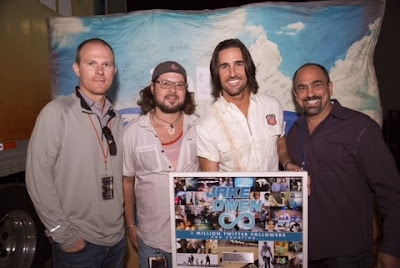 NASHVILLE, TN (October 24, 2013) – RCA Nashville recording artist Jake Owen, whose title-track from his upcoming studio album DAYS OF GOLD is TOP 20-and-climbing at Country radio, set the stage on fire with an electrifying performance at the Hollywood Bowl in Los Angeles on Saturday, 10/19. Before taking the stage, the chart-topping vocalist was surprised with a plaque commemorating his most recent career milestone - reaching 1 million followers on Twitter. Known for his dry sense of humor and ultimate fan engagement across this platform, it’s no surprise that Jake crossed this impressive threshold.

Out on 12/3, Jake’s fourth full-length studio album DAYS OF GOLD was produced by Joey Moi and is poised to follow the success of his BAREFOOT BLUE JEAN NIGHT album, which delivered four consecutive #1 singles with the multi-week smashes the DOUBLE PLATINUM “Barefoot Blue Jean Night” and PLATINUM “Alone With You,” and the GOLD-certified hits “The One That Got Away” and “Anywhere With You.”

The Vero Beach, FL native is partnering with Target to release an exclusive deluxe version of the highly-anticipated DAYS OF GOLD album, available for pre-order now at Target.com. In addition to the album’s 12 tracks, the Target deluxe album will feature four bonus songs, including "After the Music's Stopped," "I Like You a Lot," "Summer Jam" featuring Florida Georgia Line, and "Surefire Feeling." Jake recently revealed to RollingStone.com a glimmer of what fans can expect from his new album, including his thoughts on the Target exclusive track “After the Music's Stopped" and current hit “Days of Gold,” which is the fastest rising single to date of his career.

Jake’s electrifying live shows and captivating songs have landed him coveted opening slots with Keith Urban, Kenny Chesney, Tim McGraw and his first headlining tour, CMT ON TOUR JAKE OWEN: THE SUMMER NEVER ENDS 2012, which made CMT history for the most sold-out shows in a row for the annual nationwide tour. Currently, the American Country Awards Breakthrough Artist of the Year is receiving rave reviews on Jason Aldean’s NIGHT TRAIN tour.

Posted by LovinLyrics at 4:10 PM