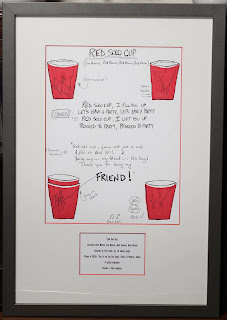 NASHVILLE, Tenn. – An assortment of lyrics for hit songs, handwritten by the songwriters who wrote them, will be up for auction on eBay to benefit the major project of the Center for Contemplative Justice (CCJ) Ecuador, in San Eduardo, Ecuador. The auction begins today, Friday, Nov. 15, at 8:30 PM/CT and runs until Thursday, Nov. 21 at 8:30 PM/CT. 100% of the proceeds will go to the project. Once the auction goes live, buyers can find the lyrics easily – just enter the item number on the ebay search site.

“After my mother-in-law’s death in 1988, a school was founded in a rural community of Ecuador and named for her -- Escuela Anne Stevens,” said Marcus Hummon, GRAMMY Award-winning songwriter and husband of Rev. Becca Stevens, founder of CCJ. “Since opening the school, a well child clinic and a women's social enterprise have also been established to create lasting changes in the community. Several years ago, we dug the only functioning well for the community.”

Hummon's wife is also Chaplain of St. Augustine's at Vanderbilt University, founder of Thistle Farms & Magdalene, and an author. Rev. Stevens adds, “There is so much to celebrate and so much work ahead. We are grateful to the songwriters who donated lyrics to this campaign. We are inspired by their inspiration, whether it comes from a ‘Red Solo Cup’ or from a ‘Well of Mercy,’ as it rises from the same source.”

These lyrics are all signed by at least one of the songwriters (co-writers and recording artists are also named but did not sign unless so indicated). eBay item numbers are included in parentheses:

Posted by LovinLyrics at 5:21 PM