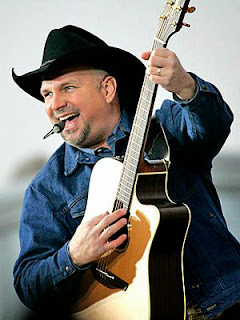 On Saturday, Nov. 9, Garth Brooks announced in the GAC special, "Blame It All On My Roots", that he will release a special four-CD box set called "Blame It All On My Roots: Five Decades of Influences". The collection will include Garth's personal versions of 40 songs from from his influences. Each disc will feature 10 songs from a different musical genre including Country Classics, Classic Rock, Blue-Eyed Soul and Melting Pot. The set will release Nov. 19 and will be available exclusively at Walmart. Covers include the Jerry Lee Lewis hit “Great Balls of Fire”, Simon and Garfunkel's “Mrs Robinson”, and the Marvin Gaye Motown classic “I Heard It Through The Grapevine”.

Making an appearance as Garth's backing vocalist is his wife, country superstar, Trisha Yearwood. She will also sing with her husband on the 1971 Conway Twitty/Loretta Lynn classic “After The Fire Is Gone.”

As an added note. be sure to set your DVR for Garth's television special on November 29, "Garth Brooks: Live in Las Vegas" on CBS. The intimate performance is the broadcast of his final show from his run at the Wynn.
Posted by LovinLyrics at 3:06 PM