IN CASE YOU MISSED IT: KELLIE PICKLER ON “ELLEN” AND FERGUSON”

Released This Week: New CD, The Woman I Am, Receives Rave Reviews
Pickler Announced to Perform on ABC's “Dancing with the Stars” on Nov. 25 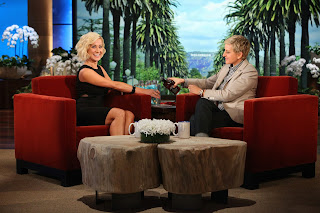 Ellen DeGeneres (right) tries to get Kellie Pickler "a little bit tipsy" before Pickler performs her current single "Little Bit Gypsy" on "The Ellen DeGeneres Show."
Photo Credit: Courtesy "The Ellen DeGeneres Show"
NASHVILLE, Tenn. – Country music singer/songwriter Kellie Pickler released her new album, The Woman I Am, on Monday, and has been making the media rounds with appearances and performances on several television shows this week. The Woman I Am was produced by Luke Wooten and Frank Liddell and features her current single “Little Bit Gypsy.” This is her first album for Black River Entertainment.

The Woman I Am has already received praise from music critics, including:

“Continuing to mature into a top-class country singer, [Pickler]…has grown from a competent interpreter of others' songs into an artist with her own vision and style. As a songwriter and vocalist, she's held onto the charm of her back-country personality while growing into a confident stylist …Add Pickler's name to the list of women making outstanding albums in a year where men dominate country radio and the media.”
– Michael McCall, Associated Press

“Too bad Pickler's best known for her personality, because her albums are as much fun as hearing her talk. (Three stars)”
– Brian Mansfield, USA Today

"On a dozen new tracks, that sound spans the sonic country landscape between the lead-off single, the pining ballad 'Someone Somewhere Tonight,' and its breezy, country-rock follow-up, 'Little Bit Gypsy.' The guitar-heavy, shuffling song, which Pickler says is the record's poppiest moment, sounds like her take on Tom Petty covering Elvis Costello's 'You Belong To Me."
– Adam Gold, Rolling Stone

“Pickler's growth is impressive, but she is still at her most charming when she lets that sassiness out. With The Woman I Am, Pickler shows how the next phase of her career may be bigger than she ever dreamed. Grade: B+”
– Glenn Gamboa, Newsday

“…Pickler is still one of the most exciting and underrated voices in country music. The Woman I Am is rooted in classic sounds, with a few nods to contemporary country, but none of it comes across as pandering…. The Woman I Am is the autobiographical declaration of a talented North Carolina native who continues to channel the sounds of Patsy Cline, Dolly Parton and Reba McEntire.”
– Erik Ernst, Journal Sentinel

In between media appearances, Pickler is also performing at venues across the nation, including the following dates:

Posted by LovinLyrics at 1:46 PM