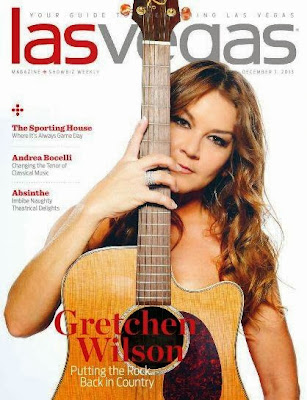 (Nashville, Tennessee...) - Gretchen Wilson raised eyebrows across Sin City last week, when the cover of Las Vegas Magazine showed the Grammy Award-winning superstar in a seemingly topless photograph holding a guitar to cover key body parts. The magazine is distributed in virtually every hotel room in Las Vegas, and the feature promoted her performances at the Golden Nugget last weekend.

In the episode, Gretchen chatted with Suzanne Alexander about Christmas traditions, family, her new album, Christmas In My Heart and her favorite holiday music videos. 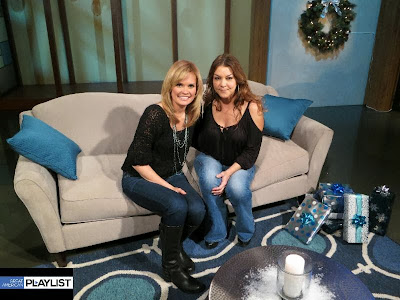 In addition to Christmas In My Heart, Gretchen released a new country album entitled Right On Time in April and the 13-song Rock covers record Under The Covers in May through her own Redneck Records label. She will wrap up 2013 by ringing in the new year at the MoonPie Over Mobile event in Mobile, Alabama on New Year's Eve.

Posted by LovinLyrics at 6:57 PM

I wonder how many do not see a nude Gretchen but simply someone with a low cut dress as I did until I read what I was supposed to be seeing?