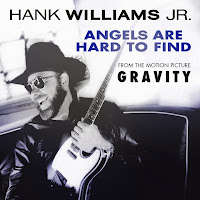 Will Hank Williams Jr. be headed to the stage of the Academy Awards?? Having won three Emmy Awards for his composition of the ever-popular theme song to Monday Night Football for 21 years, Williams is garnering rave reviews for his musical contribution “Angels Are Hard To Find,” to the current Warner Bros. Picture Gravity.

"There are a couple of parts in the movie where the grizzled man astronaut, played by the devastatingly charming George Clooney, is floating around listening to music in his suit. He's listening to Hank Williams Jr.'s "Angels Are Hard To Find" which ostensibly is about a woman but can be applied to basically anything else. It was just a tiny part of a gigantic movie, but it was entirely moving. It was so peaceful and terrifying. I loved it." – Shea Serrano, LA Weekly

“This song was on both my 1974 album Living Proof and the 1991 album Pure Hank.  It just proves good songs resurface at the appropriate time,” says Hank Williams Jr.  “I like both Sandra Bullock and George Clooney in their roles.  Then hearing my song in the movie, for me, already made it a winner.”

“Angels Are Hard To Find,” is included twice within the movie where Dr. Ryan Stone (Sandra Bullock) is a brilliant medical engineer on her first shuttle mission, with veteran astronaut Matt Kowalsky (George Clooney). But on a seemingly routine spacewalk, disaster strikes. The shuttle is destroyed, leaving Stone and Kowalsky completely alone - tethered to nothing but each other and spiraling out into… More the blackness. The deafening silence tells them they have lost any link to Earth...and any chance for rescue. As fear turns to panic, every gulp of air eats away at what little oxygen is left. But the only way home may be to go further out into the terrifying expanse of space.

Download "Angels Are Hard To Find" on iTunes:
https://itunes.apple.com/us/album/angels-are-hard-to-find-from/id730789086

Posted by LovinLyrics at 2:38 PM