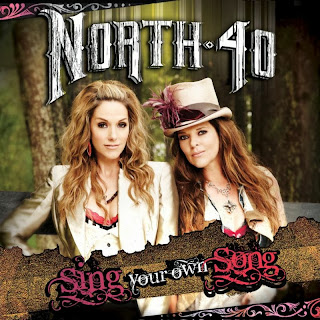 (Nashville, Tennessee...) - - Rhymetown Entertainment duo North 40, comprised of singer/songwriters Paige Logan and Heather Looney, had a breakthrough hit with their debut single and video, "Hey Girl Hey," and now the label has set January 28, 2014 as the release date for their Sing Your Own
Song CD. Heather and Paige wrote or co-wrote all 13 songs on the album, which was produced by hit producer/songwriter/musician Leigh Reynolds and Grammy Award-winning engineer Mills Logan.

The songs on Sing Your Own Song run the gamut of emotion and the album, "is a vivid expression of what we have seen, tasted and touched throughout our lifetime," said Heather. "It has become a light for us that shines hope, encouragement and an element of truth along the way. Living life to the fullest...This is what North 40 is all about."

Seven of the 13 cuts were written by Heather and Paige, and they partnered with some of Nashville's top tunesmiths such as Jennifer Denmark, Dave Brainard, Adam Mitchell, Leigh Reynolds and Amber Rose on the remaining. The result is a collection of songs melded together and finely tuned for their fans to enjoy, remember, reflect and contemplate stirring up some dust of their own.

The female anthem "Hey Girl Hey" has received incredible feedback from Country radio, fans and the music industry. Noted music journalist Robert K. Oermann wrote "...among the many unknowns I listened to today, they (North 40) were my favorites. Give 'em a Discovery Award" in MusicRow Magazine. Brian Stayton, of WIKQ-FM in Greeneville, Tennessee wrote: "'Hey Girl Hey' became our most requested song of the week--  AND it's only Tuesday!"

"As we continue to broaden our listening audience, we want all to know that we truly believe that life begins at North 40 and it's never too late to be what you might have been," said Paige, summing up the North 40 message. "One thing is certain, if you're too afraid to make that first step, you will never get to where you want to be. We want everyone to kick up some dust in their own North 40!"

Paige and Heather will be making a series of media appearances the week of release, as they take their music and their "Life Begins at North 40" brand to a national audience. Sing Your Own Song will be available at iTunes, Amazon and virtually all other digital retailers.

Connect with them at: