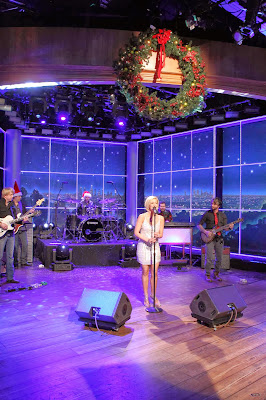 Photo: Courtesy of "The Late Late Show with Craig Ferguson"

NASHVILLE – Black River Entertainment recording artist Kellie Pickler returns to “The Late Late Show with Craig Ferguson” on Wednesday, Dec. 18, to perform the holiday classic “The Man with the Bag.” The show airs on the CBS Television Network. Pickler's version of the song is available everywhere digital music is sold.

Pickler’s current single “Little Bit Gypsy,” from her new album The Woman I Am, can be heard on country radio. She performed the song last week on the American Country Awards on the FOX Television Network. View that performance here.
Posted by LovinLyrics at 3:03 PM