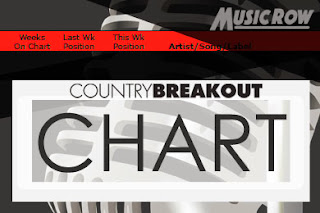 We realize that Music Row charts aren't the big charts like Mediabase / Billboard, but that doesn't mean they are any less important to an artist or their fans. We post them because when an artist makes the charts with their new single, it shows progress and promise for that artist, a sign that they're doing something right. Does it mean that song will wind up on the big charts? Not all the time, but that's the nature of the business. Not everyone can make the big leagues but at least an artist has made some kind of impact with listeners, whether it be small market, locally owned radio, or internet/satellite stations. People are listening and requesting the music and that's what's really important.

Not all stations can afford to report to the big charts so they report to those they can like Music Row. We believe that ANY positive move in the right direction is important for an artist and those that listen to these smaller market stations deserve their feedback to be paid attention to as well as those that listen to major market stations. Any air play is positive and anytime we can report something positive for an artist, we do it. This is why we post Music Row progress at the end of the week.

The reason we're addressing this is because we received an email while back stating that that "Music Row really doesn't count" when it comes to real progress, that their chart basically doesn't matter and that I should focus more of Mediabase and Billboard. We think it matters any time an artist's music is given airplay and people are listening and we will continue to post about Music Row charting. All big charted hits had to start somewhere and we believe Music Row to be one of those places.