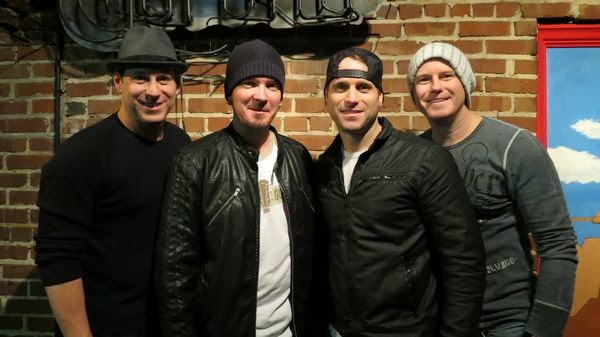 If you weren't at City Limits last Friday night, you missed one HELL of a party. Parmalee came home to Raleigh to celebrate their first #1 hit, "Carolina" with their hometown friends and family and what a celebration it was. Advance tickets sold out well ahead of the show and day of event tickets sold out way before the opening of the doors, the line was already about 50-60 people deep by 7pm just hoping to get in the door. Insanity was about to set in once those doors opened.

We arrived pretty early as we typically do and sat in on sound check. I swear these guys could make a entire show just out of sound check. They get better and better every time I hear them, their harmonies even tighter than the time before. We had an interview arranged after sound check and met the guys upstairs. It was great to see them again. They had just released "Musta have a Good Time" the last time we sat down and now here it is, a year and a half later and they're bonafide, proven country hit makers with "Carolina" topping the charts for 2 weeks straight. This is why we do what we do, watch those we have been supporting as new up and comers reach the pinnacle and see their hard work pay off. When it comes to hard work, these four guys aren't a stranger to it, nor are they afraid of it. From years of playing the bars, knocking on industry doors, being told no, and surviving a near tragedy in 2010 when a robbery nearly cost drummer Scott Thomas his life, these guys have shown that they're meant to be here and that no just isn't a word that's gonna work for them. Humility, determination and pride don't come in a more obvious package than Parmalee.


When the opening band took the stage, I wasn't quite sure what to expect from a band named "Jive Mother Mary" but was highly impressed. These guys know how to capture an audience from the first funky note to the last. This band created an electric atmosphere, full of energy. By the time they announced that Parmalee was coming up next, this room was well in party mode and ready!

Parmalee walked out on stage and you could feel the energy almost explode. The audience was one of the loudest I've ever heard at a City Limits show and I've heard some loud ones. What really made my heart happy was seeing the mutual appreciation on the faces of both the crowd and the band. The audience appreciated Parmalee choosing Raleigh to celebrate their first #1 single and they appreciated them for giving them that place at the top of the charts. These four guys gave one of the best shows I've ever seen them give, laying it all out there and showing the progress they've made as a band. They've always been good but they have truly amped it up a notch and are proving that good things come with time. The set list was basically the new cd plus a couple of extra songs including "Fireball", their hilarious parody of Miley Cyrus' "Wrecking Ball". This show was definitely worth getting up at 7:00am, driving 3 hrs and staying at the venue from the 2:00pm load in and sound check until the last note was played after midnight. Thanks guys for a GREAT night. Can't wait til the next #1 Carolina hometown throw down!
Posted by LovinLyrics at 7:54 PM