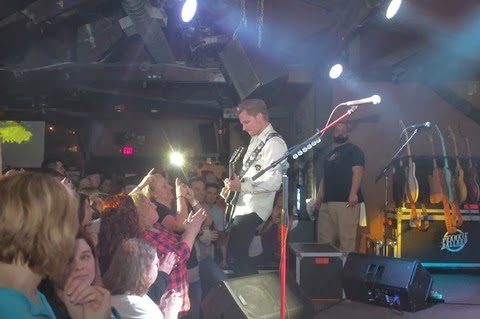 Pictured: Frankie Ballard celebrating his album release with a packed out show at Coyote Joe’s in Detroit last night (2/13). After a full day of media in NYC and all flights going to Detroit cancelled, Frankie rented a car and drove through the snowstorm just to make the show.
Photo Credit: Courtesy of Warner Music Nashville

The guitarist-singer’s Top 10 smash, “Helluva Life,” landed at the No. 7 spot on the Country radio charts this week and marks his fastest rising track to date. Serving as the album’s lead single, the infectious anthem has already sold more than 300,000 digital copies.

Critics are taking notice of Ballard with USA Today highlighting SUNSHINE & WHISKEY as a notable new release, “…he’s got an appealing rock delivery, and the songs get more thoughtful as he goes along.”