BRANDY CLARK MADE HER DEBUT ON “ELLEN” 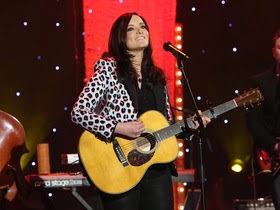 “Performing on ‘Ellen’ was a bucket list item for me, and I was thrilled to be there,” said Clark. “I appreciate her support of new artists and music from all genres, and hope to have the opportunity to return to her show some day.”

Clark is currently touring with Jennifer Nettles, and will perform at The Wiltern in Los Angeles this Saturday, Mar. 29. In an interview with journalist Tricia Despres for Country Weekly, headliner Nettles had this to say about Clark: “[Brandy] feels to me as someone country music needs right now. It’s been a joy watching the audience realize that they know her and her music, but I also just love that she is coming out with us now to support her own music. I have been a fan of hers for a long time. She is the real deal.”

Journalist Melinda Newman recently interviewed Clark for Hitfix.com, writing, “Clark’s clear, silky voice carries the tales of people that you either recognize yourself or your neighbor in they are so richly drawn and cinematic in their detail. There’s a realness to the characters.” Earlier this year, Hitfix named Clark “one of 5 country artists to watch.”

In addition to writing and performing her own songs, Clark also writes for other artists. Miranda Lambert took her song “Mama’s Broken Heart” to No. 1, as did The Band Perry with “Better Dig Two.” She’s also had songs recorded by Sheryl Crow, Reba, Kenny Rogers, Darius Rucker, and frequent collaborator, Kacey Musgraves.

For tour dates and more information visit www.brandyclarkmusic.com.
Posted by LovinLyrics at 12:36 PM