CMT, GAC, ZUUS SPIN “UNTIL I MET YOU” VIDEO, SIRIUS XM ‘THE HIGHWAY’ THE SINGLE AND THE ROAD IS HOT FROM COAST-TO-COAST 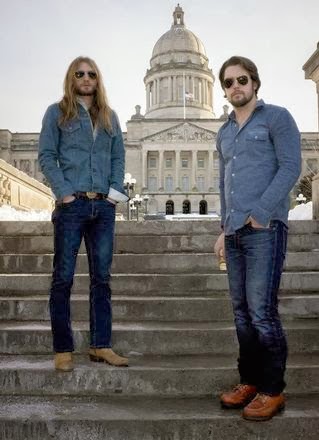 NASHVILLE, TN – (March 5, 2014) – Country music’s hottest duo, hailing from Kentucky, Sundy Best, is experiencing unprecedented sleep deprivation as Bring Up the Sun, their eOne Music debut hits the streets during what is turning out to be an auspicious day for the Prestonsburg natives. The Kentucky General Assembly declared March 4th “Sundy Best Day” during yesterday's general session at the capitol; chosen by the University of Kentucky to perform “My Old Kentucky Home” for Senior Night during the Kentucky Wildcat basketball game on ESPN at Rupp Arena to over 20,000, as well as, a slew of sold-out shows throughout the state round out an exciting week. Bring Up The Sun is now available at all digital and retail outlets with all 15 songs written or co-written by Sundy Best.

Country Weekly recently named Kris Bentley and Nick Jamerson, Sundy Best, as one of the top acts to watch in 2014, while CMT taps them as part of the coveted “Listen Up” program that will highlight Sundy Best across CMT platforms throughout the year in a multi-platform initiative introducing their music to a passionate music fan-base. Additionally, the video for the single “Until I Met You,” can be seen on CMT, GAC, Zuus and numerous country-centric websites as the single is getting significant airplay on Sirius XMs “The Highway.” The duo has also graced the Grand Ole Opry stage on multiple occasions.

Sundy Best has spent the past year offering an array of well produced and played content across numerous platforms that has positioned them as one of the most active social media acts on the scene today. The duo has organically created a movement called “#kinfolkmovement” that represents the duo’s growing fan base. Kris and Nick want to have a family atmosphere everywhere they go and feel that this is a great way to integrate the growing number of family members that continually spread the word about Sundy Best.

Please visit HERE to find out more about the up and coming duo. Read what others are saying below.

"We recently announced the first half of CMT's 2014 'Listen Up' program and Sundy Best was the only independent band chosen! We've proudly supported their music and videos for over a year and believe they are already superstars!" Leslie Fram, Senior Vice President of Music Strategy at CMT


"Sundy Best is the kind of band that really should have a chance to break out big as the 15 tracks on Bring Up The Sun suggest. This is an album that's best left to be discovered than dissected. Just believe us when we say if you like real, honest music, you should buy a copy of Bring Up The Sun by Sundy Best."
- Matt Bjorke Roughstock.com

"Sundy Best makes a self-reliant statement……For new duo Sundy Best -- practitioners of a laid-back, DIY style of country -- a lot stands out. Based in Lexington, Ky., their unique sound comes from the core of the band -- acoustic guitar and a box-like drum called a Cajon. And, impressively, their hook-laden new album Bring Up the Sun is entirely self-written."
- Chris Parton, CMT.com

"Blending an eclectic mix of acoustic guitar with the beat of the Cajon drum and the compelling vocals of Nick Jamerson and Kris Bentley, Sundy Best looks as if they are about to embark on a career many others are often left to dream about."
- Tricia Despres - Kentucky Monthly