GRAMMY-NOMINATED RECORDING ARTIST WILL HOGE VISITS BELMONT UNIVERSITY FOR GRAMMY U: OFF THE RECORD WITH WILL HOGE 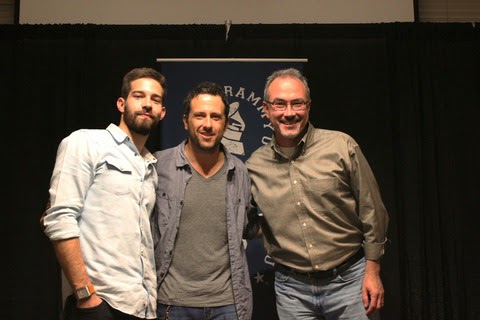 NASHVILLE, Tenn. - April 17, 2014 - Grammy-nominated recording artist Will Hoge joined GRAMMY U and industry veteran Ken Tucker for a special event, “GRAMMY U: Off the Record with Will Hoge” on Tuesday night (4/15) at Belmont University in Nashville. The singer-songwriter gave an acoustic performance of his hit songs “Strong,” “Still Got You on My Mind” and the No. 1 Platinum-selling smash “Even If It Breaks Your Heart, ” recorded by the Eli Young Band. Hoge participated in a special Q&A moderated by Tucker, and he spoke to students about the creative process behind each song and how to develop a following as an artist.

“It is easier now than ever to get out there and establish a relationship with fans through music. I just try to produce great work and let the fans be a part of it,” said Hoge.

GRAMMY U helps to prepare college students for their careers in the music industry through networking, educational programs and performance opportunities, www.grammy.org.

For more information about Will Hoge, visit www.willhoge.com.
Posted by LovinLyrics at 12:56 PM