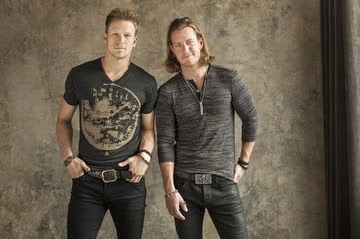 Details: Superstar duo Florida Georgia Line gives fans an in depth look in to their road to success. Members Tyler Hubbard (Monroe, Georgia) and Brian Kelley (Ormond Beach, Florida) discuss the moments in their life that defined them, the highlights of their career and the magic behind Florida Georgia Line. The one-hour special will include never-before-seen childhood videos and commentary from superstar friends like Jason Aldean, Luke Bryan, Nelly and Jake Owen who all weigh in on the duo’s fast-rising career.

Florida Georgia Line has skyrocketed since releasing four consecutive, multi-week #1 smashes in the US and Canada with the PLATINUM-certified hits “Stay,” “Get Your Shine On,” "Round Here" and 6X PLATINUM “Cruise,” making them the only artist in history to join Brooks & Dunn in achieving this accolade. Breaking the record for longest #1 on Billboard’s Hot Country Songs Chart, “Cruise” has sold over 6.9 million downloads in the US alone and is the best-selling digital Country single of all time (SoundScan). Amassing international appeal, the duo has tallied over 14 million tracks sold worldwide from their chart-topping, PLATINUM-certified debut album HERE’S TO THE GOOD TIMES (Republic Nashville). Produced by Joey Moi, FGL penned over half of the tracks on the project, earning a BMI Pop Award for writing “Cruise” Remix. The deluxe version includes their PLATINUM-certified smash “This Is How We Roll” featuring Luke Bryan, which is on the verge of #1. Previously taking home ACA, AMA, ACM, CMA, CMT Music Awards and most recently a Billboard Music Award for Top Country Song, the duo is set to perform on the CMT Music Awards (June 4), racking up five nominations for the fan-voted awards - Video of the Year ("This Is How We Roll" feat. Luke Bryan), Duo Video of the Year ("Stay" & "Round Here") and Collaborative Video of the Year ("This Is How We Roll" feat. Luke Bryan & "Cruise" Remix feat. Nelly). Fans can vote now via http://www.cmt.com/cmt-music-awards/vote.jhtml, leading up to the awards show on CMT. The ACM Vocal Duo of the Year is the face of this year’s Outnumber Hunger campaign, an initiative from General Mills, Big Machine Label Group and Feeding America that helps fight hunger in local communities and has helped secure more than 25 million meals to date. Currently, FGL is on the road with Jason Aldean and will launch later this month their headline run – THIS IS HOW WE ROLL SUMMER SERIES 2014 – featuring special guest Nelly and opener Chris Lane. This fall, they will host “This is How We Cruise” aboard the Norwegian Pearl.

For tour dates and more, check out FloridaGeorgiaLine.com.