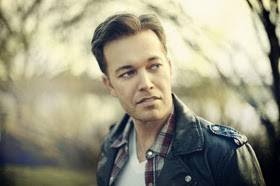 NASHVILLE, Tenn. (May 20, 2014)—Nashville singer/songwriter and country recording artist Lucas Hoge is pleased to announce his official endorsement relationship with Wrangler National Patriot.  The endorsement follows his four-year relationship with the organization as a committed member of the USO Wrangler National Patriot Memorial Day Tour. (Hoge has been a tour participant since 2011.)

His contribution to the organization’s endeavor continues; Hoge is set to embark on the 5th Annual USO Wrangler National Patriot Memorial Day Tour set to launch today (May 20, 2014) with seven stops scheduled between Washington State and Alaska at remote US Coast Guard Units throughout the remainder of the the month.  With the mission to celebrate and extend gratitude to our men and women of services in all branches, the USO Wrangler National Patriot Memorial Day Tour concentration in the previous four years lent support to entertain our Marines, Army, Navy and Air Force;* the 2014 tour will cater to our nation’s United States Coast Guard.

"The endorsement solidifies our mutual sentiment to support our military. I look forward to being with our Coast Guard Family this year during the USO Wrangler National Patriot Memorial Day Tour.  The ‘Coastie’ community is a tight knit family, much like our Wrangler Team,” said Lucas Hoge. “I'm right where I need to be, with our military family, on Memorial Day and I am truly blessed to be a part of a team that represents the entire western industry year after year.  It’s an honor to perform for them to ‘bring some country home’.”

"We have a high level of pride and respect for the individuals serving in the U.S. military who show heroism every day in an effort to protect our country," said Phil McAdams, President/Wrangler Specialty Apparel.

Founded in 2009, the Wrangler National Patriot is a year-round program developed to help raise funds to support American military veterans and their families and to serve as inspiration for all Americans to rally around each other in patriotism.