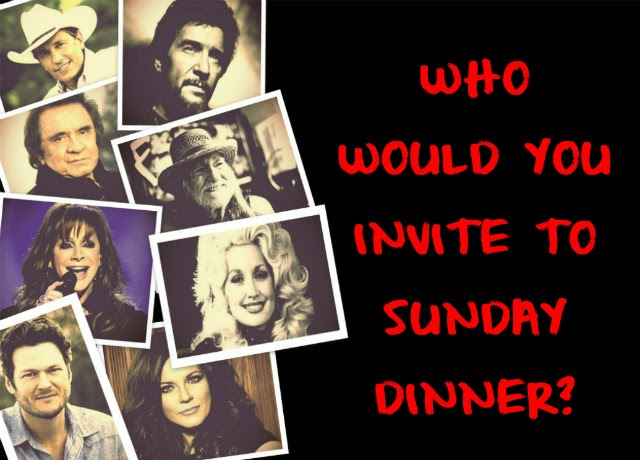 There's nothing better than a quiet Sunday dinner with your family and friends, talk about your day, just spend quality time together, making great conversation between bites. Since we love to get your feedback and thoughts on things, we though we'd ask you which 3 artists you'd choose to invite to your Sunday dinner. From the answers we go, sure looks like some interesting conversations would be going on.

Cindy Walley Chang said: "Big Kenny, Keith Urban, & Blake Shelton. One for his big heart, one for his sweet soul and nice looks, and one for laughs."

Mary E. Brewer said: "Christian Kane would be the only choice for me.."

Lauren Kay said: "Cher, Dolly, and Carol Burnett - my 3 most favorite women in the world."

Lana Foster has her invite out for "Tate Stevens, Tate Stevens and Tate Stevens, I want him all for myself Even though I'm old enough to be his mother, want to talk in a motherly way, I love this young man's voice!!!"

Nancy Callahan's reply was "Johnny Cash, Christian Kane, and Garth Brooks (who I knew in college:) )."

Jacquie Wallis said her choices would be "Christian Kane (always my #1 choice), Carol Channing (not country, but funny as all get out) & Garth Brooks because #ChristianKane would get a real kick out of that, being that Garth is one of his 'biggest musical influences'."

Mark Miller said he'd like to spend his time getting to know "Jason Michael Carroll, Waylon Jennings, and Charlie Daniels!"