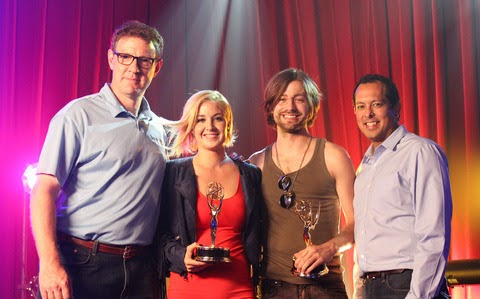 Nashville, TN (June 18, 2014) – Congratulations are in order for RPME Records powerhouse vocalist and Potomac, MD native Maggie Rose, who won The National Capital Chesapeake Bay Chapter of the National Academy of Television Arts and Sciences (NATAS) local 2013 Emmy Award, on Saturday (6/14) at the 56th Emmy Awards Gala. The singer co-wrote and performed “Get Ya Game On” for Comcast SportsNet as the theme of their coverage of the National Football League’s Washington Redskins throughout the 2013 season.

“I was thrilled that the song really resonated with the sports crowd,” says Maggie. “But to win an Emmy for it has exceeded my wildest expectations. I'm incredibly honored.”

Maggie’s parents, Lizz and Steve Durante, were on hand to accept the award on their daughter’s behalf at the 56th Emmy Awards Gala. On Tuesday (6/16), the singer received the Emmy Award while shooting a new version of the “Get Ya Game On” promo in Nashville for the upcoming 2014 NFL season.

Her local 2013 Emmy Award win follows the release of Maggie’s latest hit, “Looking Back Now,” which is the third single from her acclaimed debut album, CUT TO IMPRESS. The project landed on Roughstock.com and CountryMusicRocks’ Best Albums of 2013, and was listed as one of only four country albums to make Amazon.com’s Best Music of 2013. Produced by Blake Chancey, James Stroud and Stephony Smith, the album features the breakthrough Top 30 hits “I Ain’t Your Mama” and “Better,” which stayed on the country music charts for over 30 weeks. The project highlights Maggie’s songwriting prowess on nearly half of the tracks. She is currently writing with Nashville hitmakers such as Dallas Davidson and Lisa Carver for her sophomore album. The new project will be co-produced by Davidson and Brian Kennedy. The talented singer has opened for the likes of Dierks Bentley, Gary Allan, Sheryl Crow and will join Florida Georgia Line's "This Is How We Cruise" aboard the Norwegian Pearl this November.