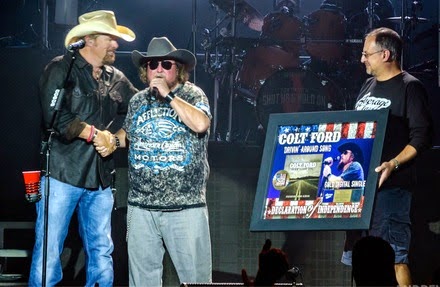 NASHVILLE, TN (September 30, 2014) – Country star Colt Ford has earned a gold certification from the RIAA for his #1 single, “Drivin’ Around Song,” featuring Jason Aldean. Currently on Toby Keith’s “Shut Up and Hold On” tour, Colt was surprised on stage in Camden, NJ this past weekend by Toby himself with an official plaque to commemorate the achievement. “Drivin’ Around Song” is on Colt’s #1 Billboard album, Declaration of Indepencence, released in August 2013.