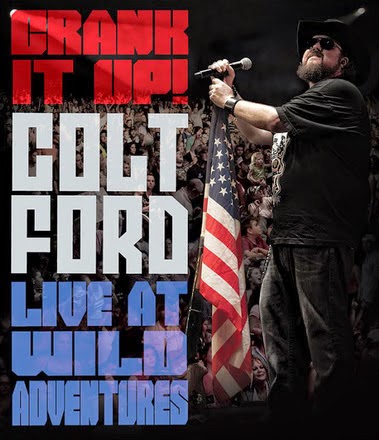 Nashville, TN, October 8, 2014…..Country star Colt Ford will release his first live concert DVD on November 11, 2014: Crank It Up! Colt Ford Live at Wild Adventures. Produced by Eagle Rock Entertainment for Eagle Vision, and Average Joes Entertainment, the129-minute DVD was filmed in HD on August 2, 2014, at Wild Adventures Park in Valdosta, Georgia. Directed by Hideout Pictures’ Potsy Ponciroli, Ford and band performed an electrifying high-energy set spotlighting 20 hit tracks from over the course of his entire career. The $14.98 collectible DVD is available online and at retail outlets nationwide. An abbreviated version of the concert will also be broadcast this winter.

Ford returned to his Georgia roots to deliver a kick-ass entertainment experience from start to finish. Exclusive behind-the-scenes footage of the concert, as well as ten episodes of Ford’s “Mr. Goodtime TV,” is also included as a special bonus accompanying the 129-minute DVD. For a sneak peek of Crank It Up! Colt Ford Live at Wild Adventures click here.

“Returning to Valdosta to film this live concert DVD was nostalgic for me,” said Colt. “This area was the first to embrace my music, and come out to my shows. These fans have been there from the beginning.”

11. Ride Through The Country