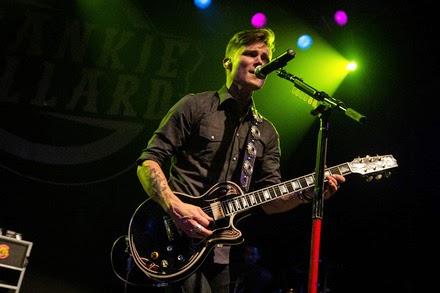 Warner Bros. Records’ Frankie Ballard performed for a sold-out crowd at the House of Blues in Anaheim, CA on Friday (12/12), for one of his last stops on his first headlining run – LIGHT ‘EM UP TOUR – as part of the exclusive Live Nation Ones To Watch with Skype.
Photo Credit: Live Nation/Colleen Callahan

Nashville, TN (December 16, 2014) – Warner Bros. Records’ Frankie Ballard will return to his home state for the holidays and bring his sold-out 5th annual Frankie Ballard’s Country Christmas show to the Kalamazoo State Theatre on Saturday, December 20th. Spreading the Christmas cheer, all of the proceeds from the singer-guitarist's energetic show will support the Van Andel Institute, a cancer research foundation based in Grand Rapids, MI. The special yearly event will include performances of many holiday classics and fan-favorites, including Ballard’s two #1 GOLD-certified hits, “Helluva Life” and “Sunshine & Whiskey.” The rising star closes out the year with continued momentum, surpassing well over 1.4 million tracks sold to date.

“There’s no better place to celebrate this time of year then with all the familiar faces of fans and friends,” shares Ballard. “I’m looking forward to bringing the best I have to this show – the lights might go off before I get off stage!”

Just off the road from his first headlining run – LIGHT ‘EM UP TOUR – as part of the exclusive Live Nation Ones To Watch with Skype, the talented showman will amp it up even further next year on Florida Georgia Line's 2015 ANYTHING GOES Tour. A road warrior, Ballard has previously opened for Jake Owen, Rascal Flatts, Kenny Chesney, Taylor Swift and longtime idol Bob Seger.

After making the move to Nashville in 2009 from Battle Creek, MI, to pursue music, Ballard drew on his working class values, performing every chance he could, honing his guitar and songwriting skills. He steadily built a loyal fan base and took the time to grow as an artist and an individual. All of these experiences culminated in the release of his current album, SUNSHINE & WHISKEY, which delivered consecutive #1, GOLD-certified smashes “Helluva Life” and "Sunshine & Whiskey," debuted in the Top 5 on the Billboard Country Albums Chart and was noted as “required listening” by ROLLING STONE. Produced by Marshall Altman (Marc Broussard), the album captures Ballard’s unique blend of blues-infused, country rock and his undeniable guitar prowess on every song.
Posted by LovinLyrics at 4:20 PM