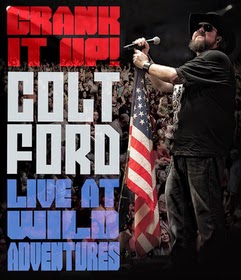 COLT FORD: CRANK IT UP! LIVE AT WILD ADVENTURES features Ford and his band performing an electrifying, high-energy show at the Wild Adventures Theme Park in Valdosta, Georgia. The first-ever concert special spotlights tracks from Ford’s entire career, ranging from his newest single “Crank It Up” to many of his top hits such as “Drivin’ Around Song,” “Ride Through the Country” and “Chicken & Biscuits.”

On the night’s all-new episode of DISCOVERING LUCY ANGEL titled “Happy G-Manniversary,” Lucy Angel band members Kate Anderton and her two daughters Lindsay and Emily work with Ford to produce a song for their new album. Meanwhile, Kate’s husband G-Man enlists his two sons’ help in planning a heartwarming surprise for his wife to celebrate their 40th anniversary.

Posted by LovinLyrics at 1:33 PM