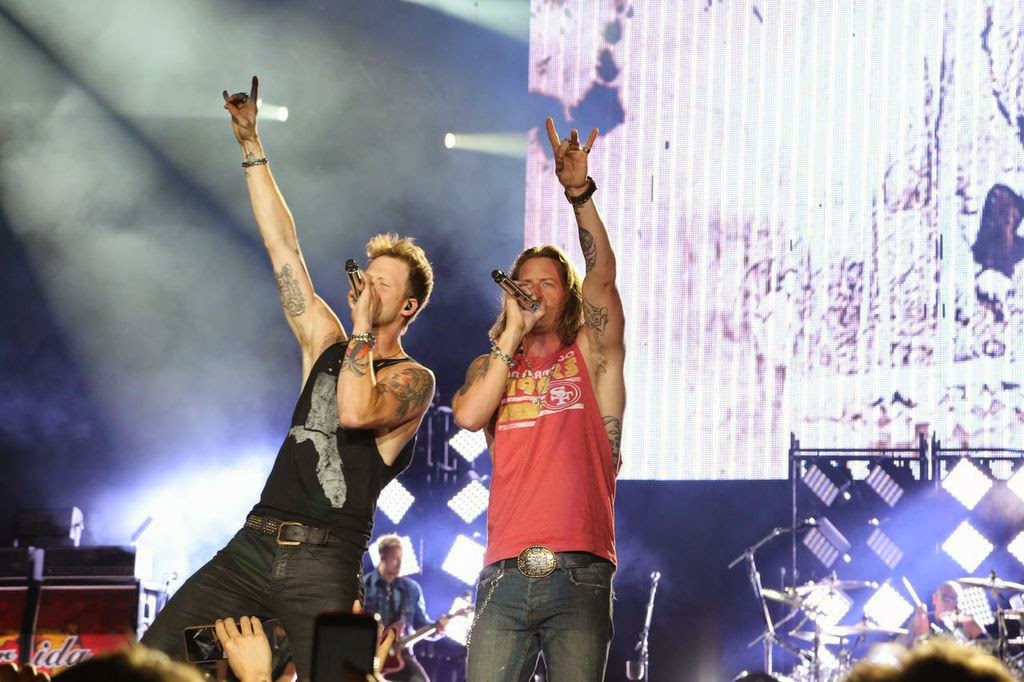 NASHVILLE, TN (January 15, 2015) – Superstar duo Florida Georgia Line will be hitting the road full throttle with their worldwide headline ANYTHING GOES TOUR 2015, kicking off tonight (1/15) in Toledo, OH, and extending into the fall. FGL will bring their seize-the-day attitude and raucous party anthems to new stops coast to coast in Austin, Dallas, Boston, Atlanta and more.

Of their live show, the Los Angeles Times lauded, “Florida Georgia Line pump out plenty of rock energy” while Billboard raved, “FGL’s intense harmonies and high energy … are unlike anyone else.” CMT described their performances as “heavy with guitars and smoke, a good dose of banjo and some well-timed swigs out of a Fireball Whisky bottle.” The Seattle Times proclaimed, “…Tyler Hubbard and Brian Kelley turned in a pitch-perfect set that touched on all their hits. They also introduced a couple of new songs and gave 10,000 people a reason to sing along and scream for 80 minutes.”

Following the sold-out opening weekend in Toledo, OH, Dayton, OH and Charlottesville, VA, the reigning ACM and CMA Vocal Duo of the Year will celebrate the tour launch with an appearance on The Ellen DeGeneres Show this Tuesday (1/20) and perform their current Top 10 smash “Sun Daze.” Check local listings for broadcast details.

10/17 - Atlanta, GA
Fans can purchase tickets beginning the week of Jan. 26th for select cities as part of Live Nation’s Country Megaticket at www.Megaticket.com, and additional ticketing information will be available in the coming weeks via floridageorgialine.com and LiveNation.com.

FGL proved to be unstoppable in 2014 with their GOLD-certified sophomore album ANYTHING GOES (Republic Nashville) catapulting to a #1 debut on the all-genre Billboard 200 and Billboard Top Country Albums charts upon release. Continuing the momentum with their PLATINUM, #1 smash "Dirt," FGL racked up 13 industry awards throughout 2014 and kicked off 2015 with a bang – an epic, live performance on Dick Clark’s New Year’s Rockin’ Eve. The accolades continue to pour in as the record-breaking duo closed out 2014 topping four of Billboard’s year-end charts and leading Forbes “30 Under 30” list.

FGL has skyrocketed to stardom becoming the only artist in history to join Brooks & Dunn in achieving four back-to-back, multi-week #1 singles; breaking the record for longest #1 on Billboard’s Hot Country Songs chart and selling over 21 million tracks worldwide of their 2X PLATINUM debut HERE’S TO THE GOOD TIMES and ANYTHING GOES. In addition to collaborating across genres with sensations like Nelly and Jason Derulo, FGL has won numerous industry awards and recently earned CMT’s Artists of the Year for the second consecutive year, the 2014 Billboard Touring Award for Breakthrough Artist and the American Music Award for Favorite Band Duo or Group, Country.

Posted by LovinLyrics at 4:45 PM