THE CAINS TRIO ADDED TO LONDON'S COUNTRY TO COUNTRY LINEUP 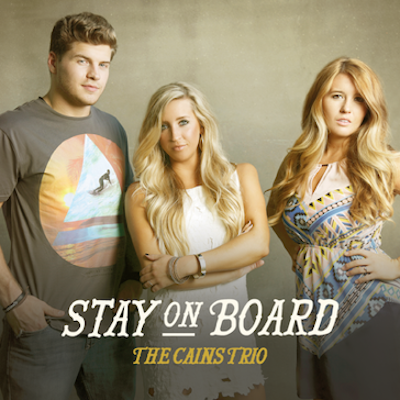 (Nashville, Tenn. – Feb. 2, 2015) – Country sibling group The Cains Trio has been added to the lineup for London’s Country to Country (C2C) music festival. C2C is scheduled for March 7-8, 2015 at London’s The O2, and marks the trio’s debut international performance.

"We have a gut feeling that performing in London will be a turning point in our career. We're gaining fans from the UK daily since C2C announced our name on their website, and we are counting down the days until C2C," commented the group’s Madison Cain.

The emerging group has already achieved success in their home state of Alabama and has garnered a solid fan base by performing shows at music venues across the state. While all three were students at Troy University, the trio entered into a video contest, eventually winning the opportunity to open for Dave Barnes in Birmingham, Ala. They have also opened for Andrew Ripp and share co-writes with Ed Hill, Billy Lawson and Roger Murrah.

The group’s current single, “Be Yourself With Me,” a mid-tempo, tenderhearted tune about allowing loved ones to take their guard down and be open and honest with one another, is currently No. 55 on the MusicRow CountryBreakout™ Chart. The group has also released a music video for the single, which can be viewed on their YouTube page at www.YouTube.com/user/TheCainsTrio.

For more information about C2C, visit the official website at www.c2c-countrytocountry.com.

Posted by LovinLyrics at 3:00 PM