41 YEARS LATER ... THEY'RE IN! THE OAK RIDGE BOYS INDUCTED INTO THE COUNTRY MUSIC HALL OF FAME 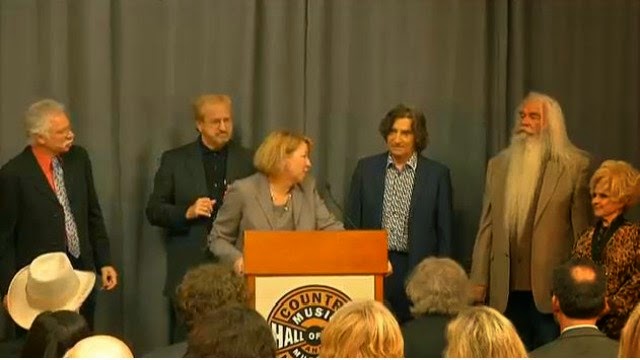 You really don't know the love I have in my heart for these four guys - Joe Bonsall, Duane Allen​, William Lee Golden​ and Richard Sterban​, The Oak Ridge Boys​. I don't even think it's possible myself to know. These men are the most selfless, giving and dedicated people I have ever been blessed to know. They have worked through so much to get where they are, they've given so much and taken so little. Their hearts are always open to those who need a nudge in the right direction, they're always willing to lend a hand when needed and if it weren't for that hand and love they extended to me 4 years ago, I would have totally given up on promoting music. They've been on the road the majority of their adult lives, they've spent many nights away from home and their loved ones to perform for millions of fans, selling out show after show every night. They've given their time to various charity organizations and appeared on numerous television shows. They've won a multitude of awards from the CMA, the ACM, the Grammys and the Gospel Music Association. The love in their hearts far exceed 41 years of album sales, concerts and public appearances. I am really just beside myself with emotion this morning watching them accept what has long escaped them, the highest pinnacle of recognition for talent in country music, the Country Music Hall of Fame and Museum​, that is until this morning. This morning, their years of dedication and conributions to country music resulted in an induction to the Hall of Fame as Modern Era Artists. Congratulations doesn't even nearly cover it. I love each of you guys so much and this is the best day since the Grand Ole Opry​ induction. Thank you for everything you do, every note you sing and every year you've done it.

Posted by LovinLyrics at 5:59 PM