FINDING YOUR WAY THROUGH THE TANGLED WORLD OF TWITTER ... A LITTLE BIT OF "TWITTIQUETTE" GOES A LONG WAY 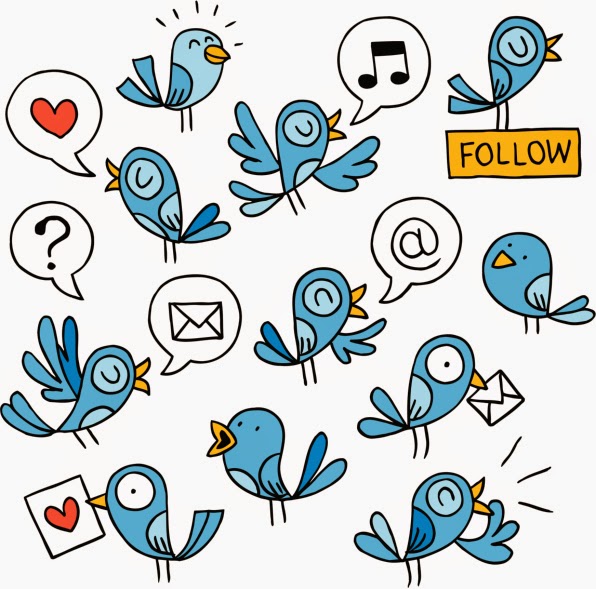 Twitter can be a confusing world of 140 characters or less, follows, replies, retweets, reposts and other strange lingo and etiquette for some people. For those who are just starting on Twitter or those who have been on and just aren't getting it, here are some hopefully helpful hints to tweet your best and enjoy the connection! These aren't steadfast rules by any means, just personal tips that I personally find helpful and think some of you may as well.

Do you beg for friendship offline? Chances are you probably don't. This is no different. Begging is frowned upon no matter whether it's online or offline and on Twitter, it's definitely not something you want to do. Not only will it not get you followers, it will get you blocked and your name will get around in circles. Don't be "that person". It's not a good thing and it's annoying as hell.

2. IF YOU WANT FOLLOWERS, YOU NEED TO FOLLOW TOO

Do unto others as you would have them do unto you, right? Yes. When someone follows me and I see that they're following 3 people but have 1500 following them, that tells me one thing - it's all about them. Granted, you don't have to follow every person that follows you, but take the time to check out bios and read timelines of those that follow you, you might find that you're missing out on some great people to follow back. One other thing, just because you follow back doesn't mean you've committed yourself to constantly tweeting that person, it means that you've found them interesting enough to keep up with what they're posting from time to time. You can tell by a glance at someones profile and their timeline whether it's someone you want to invest your Twitter time in.

Don't tweet out negative things about someone else, that makes you look like an ass, not them. It also says a lot about you. Other things you may want to reconsider before posting - off color jokes, pics that are too sexy, too much personal information about yourself, your email address or phone number, photos of abuse whether it be animal or human, or photos of your latest bloody injury. Just keep in mind that everyone sees these, not just certain people.

4. AUTOMATED MESSAGES ARE IMPERSONAL - TRUTH BE TOLD, THEY JUST SUCK

While it's nice that you want to ensure you acknowledge everyone that takes the time to follow you, these automated messages saying stuff like "Thanks for following. Be sure to follow me on Facebook and Instagram too" are just impersonal and personally are a turn off. Twitter is about connecting, so if you want to really make a connection, take the time to tweet 140 characters of gratitude and address the follower personally. You'll make a much better impression instead of giving off the impression that you're too busy to respond personally or that you don't care to.

When you retweet every tweet that's about you, it says just that "hey, this is about me! Look who's talking about ME!". Follow Fridays are terrible for it! Take yourself out of the equation and post your own #FF with those people instead.

And speaking of #FF, don't just tweet a random list of names. Choose a few and tell others WHY they are worth following and why you choose to recommend them as great people to connect with.


6. NOT EVERYTHING NEEDS TO BE RETWEETED

Please don't retweet everything that comes across on your timeline. Retweeting is there for posts that you think other Twitter users want to know or something that would appeal to them. The fact that your friend's daughter got caught having sex with her boyfriend isn't something that needs to be retweeted. As a matter of fact, those things should be sent in direct messages.  Also, everything that mentions your favorite celebrity doesn't need to be retweeted either, keep it to the most important informational tweets, not that he/she just ate a Taco Bell burrito.

7. LIMIT YOUR DIRECT REPLIES TO THAT PERSON, NOT EVERYONE

If you see a tweet that involves more than one person and you find yourself in the middle of the conversation, once the conversation changes, don't continue to include everyone in all of your tweets. For example, if 3 people are talking about something and you decide to jump in the conversation and say hi to 1 of those 3 people and ask how their mom's doing, don't include the other people in your tweets. I've found myself caught up in a conversation between 2 people that were talking about how well someone filled out their Wranglers just because I originated a tweet about an upcoming show. I finally had to ask them not to include me in that conversation.

8. RESPOND TO TWEETS AS MUCH AS YOU CAN - SAY THANK YOU

Again, Twitter is about connecting. If you don't respond to those that take the time to tweet you or about you, why should they continue to do so. You've got time to tweet about your work out, that cool outfit you just bought, your weekend plans, your kid's acceptance to college, your dog's latest funny picture, and other things, you have the time to say thank you and acknowledge that someone thought enough of you to tell others. Say thank you and let them know you appreciate it. Start a conversation, agree with something someone has posted, let them know a quote they posted meant something to you - JUST CONNECT!

9. NOT EVERYONE IS GOING TO RESPOND TO EVERY THING YOU TWEET

People seem to think that everyone is on Twitter 100% of their day. People have jobs, families and other responsibilities. Some people have their tweets on scheduler and aren't sitting at their computers or on their phones personally tweeting. People aren't going to respond to everything you post or tweet them, especially celebrities. Keep in mind that celebrities have a very limited window of personal time and when they are able to get onto Twitter, they have hundreds if not thousands of tweets a day that they see. Sometimes you're going to get overlooked, it's part of Twitter life. Don't get offended and don't take it personally, chances are your tweet was lost in the shuffle or they just honestly didn't have time to respond. You're not the only one and trust me, it's not personal, unless your tweet was of a questionable nature, then it may have been ignored, but most of the time it's just overlooked or there was a lack of time to respond to everyone. There's no need to hound someone to death to respond to your tweets, that's going to have the complete opposite effect of what you want to happen and will get you blocked. It also makes you appear to have issues that only a high paid therapist or medication can attempt to fix. Again, don't be "THAT PERSON".

Posted by LovinLyrics at 1:03 PM