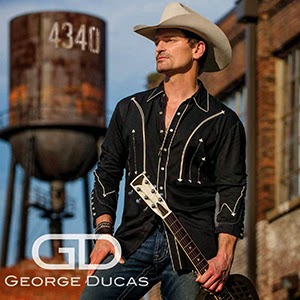 George Ducas’ newest single “LoveStruck” is a song about a guy who’s fallen for a girl and he’s “lovestruck.”  The 2nd single off of Ducas’ 4340 album, it proves to be slightly reminiscent of Billy Currington’s “Don’t It.”  If you haven’t heard him before this album, you’ve definitely heard what he’s written.  His songs are famous across decades of country music, writing with Radney Foster for “Just Call Me Lonesome” launching his songwriting career all over Music Row.  The duo continued to write together and found their way onto Dixie Chicks album “Wide Open Spaces.”  Ducas himself found himself in such laudable company as George Jones and Garth Brooks with goofy favorite “Beer Run (B Double E Double Are You In?)” writing it with Keith Anderson, Amanda Williams, Kent Blazy and Kim Williams and ended up at Gary Allan’s “Send Back My Heart” before heading back to Texas country with Eli Young Band, Randy Rogers Band and a myriad of others.  His talent as both a singer and songwriter shines through in this newest offering of his.  A catchy song that with a little bit of beachy sound with ear worm lines such as “her kiss, her touch, wham-bam like a 1, 2 punch,” this song will surely find its way to the airwaves before long!

Posted by LovinLyrics at 7:57 PM

I agree! I love this song!