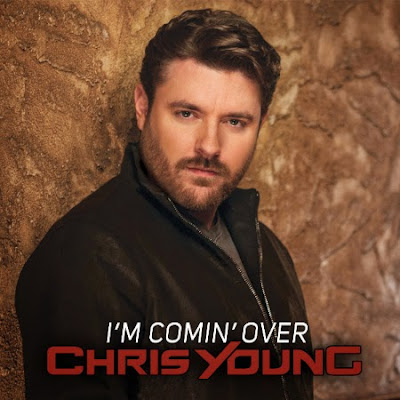 Nashville, TN - (May 11, 2015) - This morning “one of country music’s most reliable hitmakers” (USA Today), Chris Young, shipped his new song “I’m Comin’ Over” to country radio. The new track which Chris co-wrote with Corey Crowder and Josh Hoge is the PLATINUM-selling singer/songwriter’s thirteenth single to go to country radio and is the first song to be released off Young’s new album that he has been recording through the winter in between sold-out tour dates both stateside and overseas. The new album, Young’s fifth for RCA Records Nashville, is being produced by both Young and Corey Crowder and is due out this fall.

“‘I’m Comin’ Over’ describes that feeling when you can’t get someone off your mind and you just have to be with them no matter the consequences,” Young explains. “It’s my first new music in almost three years and I’m really excited to share it with my fans.”

Young has a glowing track record with country radio. The 29-year old has racked up SIX No. 1 songs at country radio with FOUR of them co-written by Young. Furthermore, Young is recognized as one of the strongest vocalists in country music today. In 2011 Young received his first GRAMMY Award nomination for Best Male Country Vocal Performance for his first No. 1 hit, “Gettin’ You Home.” The Murfreesboro, TN native has gone on to receive EIGHT Gold/Platinum singles including “Tomorrow,” “You,” “Gettin’ You Home,” “The Man I Want To Be,” “Aw Naw,” “Who I Am With You,” “Voices” and his most recent hit, “Lonely Eyes.”

To coincide with the release of the new music, Young is launching the Summer of “I’m Comin’ Over” where Young’s fans can visit ChrisYoungCountry.com to enter into the sweepstakes where one lucky winner will receive roundtrip airfare for them and a guest plus hotel accommodations and tickets to a Chris Young concert in select cities.

The first installment of the Summer of “I’m Comin’ Over” will be the “I’m Comin’ Over” to Vegas! Starting tomorrow (May 12) fans can enter the sweepstakes at ChrisYoungCountry.com/vegas to win tickets to Chris Young’s June 6th concert at the Mandalay Bay Beach, roundtrip airfare and a two night stay at the Mandalay Bay for the winner and a guest. Young will "come over" to the winners' room and deliver the tickets personally.
Posted by LovinLyrics at 7:28 PM