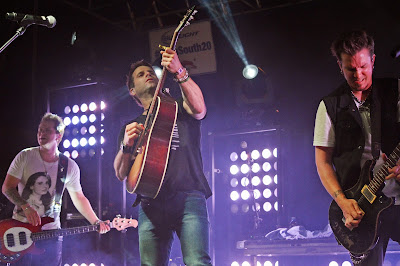 It's such a great thing to see how far these four guys from such a small rural town as Parmele, NC have come in such a short time ... well, in country music anyway! They sure haven't been in music a short time, they've been knocking out the songs for about 10 years now and it all started in a small white barn dubbed "Studio B"in a town no bigger than it looks on a map. Well, that town may be small, but everyone knows where it is now thanks to this band.
Noticed by Deep South Entertainment's Dave Rose about 10 years ago, Parmalee was performing as a rock band in tiny clubs and bars around North Carolina. They were playing to whoever would listen, wherever they would listen. They eventually built a dedicated and rather large local following and established themselves as a credible act on the local live music scene. Their music footprint continued to grow until a robbery in 2010 nearly stopped them in their tracks permanently. One night in late September 2010, following a performance at "The Money" in Rock Hill, SC, two armed men,  Demario Burris, 22, and Dytavis Hinton, 22, attempted to rob the band on their bus. Both sides exchanged gunfire and drummer, Scott Thomas, was hit in the leg, shoulder and stomach. Burris was killed and Hinton was wounded. In critical condition, Scott was nearly killed and was hospitalized for over a month, with 10 of those days spent in a coma.  By a pure miracle, Scott recovered from the near fatal shooting and was back behind the drums in 2011 and they were determined to pick up right where they'd left off. Shortly after the incident, the local rock scene was starting to go stale and not going anywhere and country music was starting a new trend, mixing genres and incorporating more diverse sounds and welcoming a variety of styles. Parmalee's sound has never been one that truly fit one specific genre and the timing was perfect for them to see how they would fare on the country scene so they changed up their appearance and with Dave Rose's recommendation, headed for Nashville. The timing couldn't have been any better, their debut single "Must Have Had a Good Time" took off on Sirius XM's "The Highway" and now 4 singles later, including a #1 hit with "Carolina", Parmalee is a proven success and a band that has established a stellar reputation in the industry as just 4 humble hometown guys who just want to play their music and connect with their fans. That reputation couldn't be more true of Matt, Scott, Barry and Josh. They are 4 of the nicest, most grounded and most gracious artists I've ever had the pleasure of connecting with. They've always taken time to sit down with me for a catch up interview every time they're in town. They have never hesistated or declined a request and when the interview is going on, it's like talking to friends. They're all about family and home and no matter where the road takes them, it will always lead back to both and this weekend proved that with the road leading back to Raleigh, NC and most of the Parmalee family members in attendance, so many that a tent was set up to accommodate them.

Parmalee was the headliner for Deep South's 20th Anniversary in Raleigh, NC on Saturday, 5/16/15 and it was amazing to see the turnout for their homecoming. An enormous crowd descended on the corner of Dawson St and Cabarrus St for an entire day of music and a celebration of the contributions of Deep South Entertainment. 20 bands, 2 stages, noon to last call. When 9pm rolled around, you could not move. We staked our places against the stage barriers and anxiously awaited Parmalee's set to begin. When the band took the stage, the applause was deafening. Having last heard them perform back in 2013, I was quite excited to see how they sounded now as opposed to the last show I attended and I can honestly say that they are at the top of their game, both stage show, vocals and instrumentation are the best I've ever seen and heard from them. They performed all of the hits like "Must Have Had a Good Time", "Day Drinking", "Already Callin' You Mine", "Dance", and they even included covers of Bob Seger's "Night Moves" and a spoof of Miley Cyrus' hit "Wrecking Ball" called "Fireball". One highlight for me was a little girl who was standing next to me in the front row, maybe 8 years old if that, wearing her Parmalee concert tshirt and smiling from ear to ear, screaming louder than any groupie and singing every word to every song. Turns out this was her first concert and the guys had been awesome to her - taking her back by the bus for a personal meet and greet with a picture and then after one song, Scott came down from the drums and handed her his drum sticks. It was such a sweet thing to see the interaction with this little girl. They left her with a memory she'll never forget. Close to the end of the show, a Raleigh city official came out on stage with Dave Rose and stopped the guys before they could close out the show. They were completely stunned and didn't know what was going on. The lady, I missed her name unfortunately, starting praising the attention that Parmalee has brought to our state and the wonderful manner in which they represent this area in their actions and in their music. She declared Saturday, 5/16, as "Parmalee Day" and presented them with a certificate. This was very fitting for the ending of the show which was closed with "Carolina".

I know the word "amazing" tends to be overused in today's language but I can honestly say that I'm not overusing it in this review. This show was just that, nothing more and nothing less than fantastic, awesome, kick ass, killer, smack daddy, bombdiggity, great, and hell yes amazing. Thank you to Dave Rose for introducing the world to this band and for giving them a platform to showcase their talent and thank you to Parmalee for just being four of the coolest guys that happen to play music for a living.
Posted by LovinLyrics at 12:24 AM