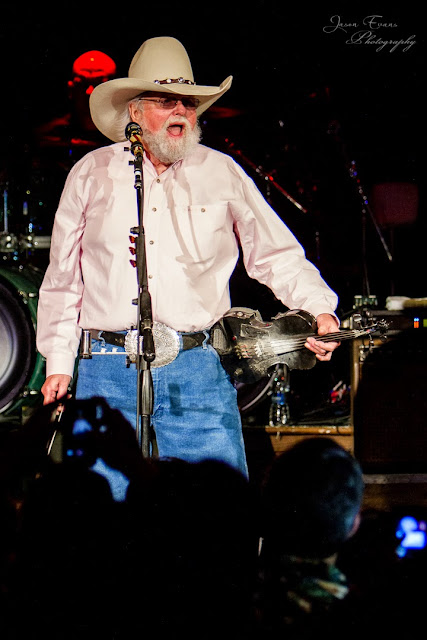 The Bluestone in Columbus, OH brought in one of the most recognizable voices in country music on Thursday night 4/30/15. The crowd gathered early and lined up excitedly to see the Charlie Daniels Band take the stage in the historic First Baptist Church, erected in 1898 and later renamed The Bluestone. Appearing on the stage that evening in support of the Charlie Daniels Band were Ohio natives Cliff Cody and Wyatt McCubbin.

Cliff Cody is known for his appearance on ABC's "Rising Star", a singing competition in which he performed a cover of Travis Tritt's "I'm Gonna Be Somebody". Unfortunately, Cody did not not continue on in the competition beyond week 3. Cliff kicked off the night with a song titled "Too Country For Country These Days" and that about sums up Cody's music. Cody is a genuine true country artist whose infectious smile engaged the audience and has a way of forcing anybody into a having a good time! The crowd shouted out song request after song request to Cody from the very start of his set and he stood up there with his guitar and big smile and said " I will definitely get to that one." You could really tell Cody had a great Ohio following with how many people knew his music including a crowd favorite song titled "Homegrown". Cody went on to perform originals as well as covers including "Pancho and Lefty", "Country Roads", "Dixieland Delight", and in the words of Cliff Cody "The fat guys version of" "All About That Bass". Some of the originals that Cody performed acoustically were "The Company You Keep" and "Good Girls Don't Drink Whiskey".

Be on the lookout for a new Cliff Cody CD later this year that will feature a new song that Cliff introduced to the Bluestone crowd called "Guitar Like a Gun." Cody introduced the song to the crowd by saying " I wrote this new song that will get me no friends in Nashville" as it is a kick in the ass to modern country radio and producers. It pay tribute to some of the legends that made country music with lyrics like "Jones is gone, we don't have Cash. We don't have Waylon no more to kick your ass." This live acoustic version also featured a short medley of the legendary country hits "Will the Circle Be Unbroken", Who's Gonna Fill Their Shoes", "Folsom Prison" and "Are You Sure Hank Done It This Way." "Guitar Like a Gun" was definitely my favorite Cliff Cody song of the evening and I am very excited about the upcoming release of his new CD.  To close out his set, Cliff dedicated his final song "Back Home" to a friend of his named Ty Henry. Ty will soon be inducted into the Ohio Military Hall of Fame.

Wyatt McCubbin is another fellow with a traditional country sound as well as a large Ohio following which we hope to see grow into more of a national following. Sporting a Bass Pro Shops hat, blue jeans and his acoustic guitar, there is nothing flashy or showy about Wyatt as he is all about the music. Wyatt's voice is as traditional as it gets. He knows how to captivate the audience with a simple performance featuring a simple guitar, a harmonica player, bass player and a drummer. As Wyatt and his band members came onstage, Wyatt stepped up to the mic with a self introduction of "Hi, I'm Wyatt McCubbin and I'm gonna play some real country for ya." As soon as he spoke those words, I knew his performance was gonna be great.

Some of the songs that Wyatt would perform included "My Honky Tonk Ain't Honky Tonk No More", George Jones' "Bartender's Blues" and an awesome country version of AC/DC's "You Shook Me All Night Long". The crowd was very receptive to Wyatt's music and engaging with each other as Wyatt smiled and gave thanks to the crowd for all of their cheers and applause throughout the set. Some of Wyatt's originals that he performedg included "Mama, I Won't Be Bad No More" and "Top and The Bottom". Wyatt closed his set with a couple of country classics, Merle Haggard's "Tonight, The Bottle Let Me Down" and Hank Jr's, "Family Tradition."

As the openers of the night finished their sets, the crowd had already witnessed an amazing night of country music. However, things were about to get a whole lot better as the legendary Charlie Daniels Band was about to take the stage. The entire bottom floor of the bluestone was packed in tightly to the stage and the entire VIP second floor was against the railing and anxiously awaiting the appearance of Charlie Daniels as the speakers began to play the "Tennessee Waltz". Upon completion of the "Tennessee Waltz", Charlie took the stage with his fiddle and burst into "Southern Boy" as the crowd got loud with excitement and arms went into the air. The band continued right along with very little speaking and a whole lotta great music including "Drinkin' My Baby Goodbye", a Bob Dylan cover "Tangled Up In Blue", and one of my personal favorites, "The Legend of Wooley Swamp". Chris Wormer, CDB guitarist kicked off the lick to "Saddle Tramp", which features the talent of the CDB with a long instrumental and many guitar solos. I found myself looking on in awe as I was mesmerized by the precise finger placement and dexterity as Charlie picked away as if he was telling a story with his guitar. Charlie took a moment to speak about how he would always reject technology anytime anything new would come about and his son would always persuade him into it by saying "Dad, you need a computer, a website and now a Twitter account". Charlie said his reaction was "Son, What the hell is a Twitter?" If you don't follow Charlie Daniels on Twitter, you need to! His tweets can be very insightful, encouraging, thought provoking, and even controversial. However, one thing you will always get from Charlie Daniels is the truth as he sees is and a genuine feeling in everything that he says. Charlie went on to say "So, for those that call me a redneck or a hillbilly, I have two words for ya! Thank You!!" The CDB then began to play "What This World Needs is a Few More Rednecks".

Although Charlie is considered the front man and the namesake of The Charlie Daniels Band, He is backed up by many talented musicians that make up his band and without them the CDB sound could not happen. The CDB is made up of Chris Wormer on guitar, Pat McDonald on drums, Charlie Hayward on bass, Shannon Wickline on keys, and Bruce Brown on guitar and harmonica. Bruce performed a song of his own called "Play Me Some Country Blues" as Charlie left the stage in his hands for a few minutes. When Charlie returned, the crowd exploded in thunderous applause as the band played "Trudy".  Charlie Daniels' most recent album, "Doin' It Dylan", is currently available and pays homage to one of Charlie's hero's and friends, Mr Bob Dylan. Charlie performed two songs from this new album including "Tangled Up in Blue" and "I'll Be Your Baby Tonight", which featured Charlie playing the mandolin. The night was filled with numerous hits as much of the crowd stayed standing the entire show with only a few of them leaving before the show would finish and many of them dancing the night away in what little space that they could find.  The CDB celebrated their 40th anniversary of "Fire on the Mountain" last year and performed "Long Haired Country Boy" from that album followed by a tribute to Johnny Cash with "Folsom Prison" including a lyric change that really got the crowd cheering with "Shot a Man in Columbus, just to watch him die - He's a Michigan Wolverines Fan!'"

Charlie Daniels is also a great man of God and is strong in his faith and it shines through in his music. The CDB has released multiple Gospel/Christian albums and if you haven't heard Charlie's bone chilling version of "How Great Thou Art" performed in person, you need to put that on your musical bucket list! Guitarist Chris Wormer showcased his musical talent with a version of the William Tell Overture that you will only hear from The CDB. Charlie followed that up with "The South's Gonna Do It Again". As the night was coming to an end, Charlie thanked the crowd for coming and closed the show with one of the most played songs of all musical genres, "The Devil Went Down to Georgia". The CDB has been entertaining audiences for many, many years and they continue to never disappoint in their live shows with amazing energy, great sound and lots of fun for everybody!

For more information on any of the artists from this great night of music, please feel free to visit their respective websites at www.cliffcody.com, www.wyattmccubbin.com, and www.charliedaniels.com.

Thanks for reading our review and hope you take time and enjoy the photos from this amazing show.

Posted by LovinLyrics at 2:59 PM