ERIC CHURCH ECLIPSES YET ANOTHER ATTENDANCE RECORD IN 2015 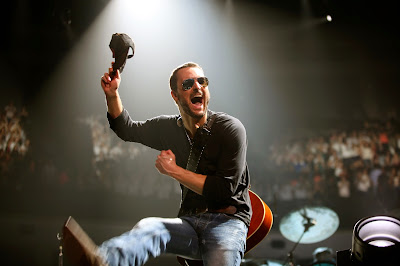 LINCOLN, Nebraska (May 21, 2015) -- With a simple yet propitious promise that no two nights will ever be the same, seven-time GRAMMY nominee Eric Church has fans repeatedly coming back for more. Last night's The Outsiders World Tour stop at Lincoln, Nebraska's Pinnacle Bank Arena further proved why the man Stereogum called "our greatest working rock star" has notched his fourth North America venue attendance record of 2015 with 15,823 present--a record previously held by Sir Elton John (November 23, 2014; attendance 14,368).

With his fervent band backing him the majority of the night, Church performed over two hours of original music with hits "Give Me Back My Hometown" and "Smoke A Little Smoke" interspersed by deeper album cuts like "Longer Gone" and "Livin' Part of Life" emerging from his vast arsenal.

"I'm humbled by the success this tour has had," Church adds. "The records it has set, by some of my muses and heroes, it's [all] very surreal. As an avid music fan, I'm not sure it's deserving in comparison to those I adore musically.  I can only say this happened because, in my opinion, our fans are second to none."

The Outsiders World Tour topped Billboard's Hot Tours last month after Church set a new attendance record at Chicago's Allstate Arena on March 20 with over 18,626 present. Church also shattered Nashville's Bridgestone Arena attendance on January 10 with an unprecedented 18,411 fans assembled for what has now become the first of three sold out shows in 2015 in Music City (Church is opening Nashville's Ascend Amphitheater with two back-to-back sold out shows July 30 & 31). On April 7, he also broke the attendance record in North Dakota's Ralph Engelstad Arena, which was previously set by Sir Elton John's 2012 show. Since launching his tour in September of 2014, Church has performed to over 800,000 fans in more than 65 cities with nearly 20 stops continuing through September 2015.

The CMA and four-time ACM Award winner finished 2014 as country music’s top-selling artist, with the year’s highest debut and sales of any release in the format as the critical and commercial success The Outsiders reached Platinum status, marking more than one million albums sold. Debuting at No. 1 on both the Billboard Top 200 Albums Chart and Top Country Albums chart, The Outsiders garnered GRAMMY, CMA, and ACM Top Album nominations and features his No.1 hits “Give Me Back My Hometown” and “Talladega” as well as his current single “Like A Wrecking Ball.” The Outsiders is the follow-up to Church’s Platinum-certified Chief, (named the 2012 Album of the Year by both CMA and ACM, and GRAMMY-nominated for Best Country Album) which featured five Top 20 singles: “Homeboy” (certified Platinum for sales in excess of one million singles); the Top 10 “Like Jesus Does” and the Top 5 “Creepin’” (both certified Gold for sales in excess of 500,000 singles each); and two No. 1 hits “Drink in My Hand” (certified Platinum) and “Springsteen” (certified Double Platinum for sales in excess of two million singles). Church’s 2006 debut album, Sinners Like Me (2006) and his sophomore album Carolina (2009) are both RIAA Gold-certified. Carolina had three hit singles: the Top 10 “Hell on the Heart” as well as Top 20 hit “Smoke A Little Smoke” and Top 10 smash “Love Your Love The Most,” which were both certified Gold. Sinners Like Me spawned three Top 20 singles: “How ‘Bout You,” “Two Pink Lines,” and “Guys Like Me.”

For more information on Church, visit www.EricChurch.com.
Posted by LovinLyrics at 11:59 AM