DEBUT SINGLE “BREAK UP WITH HIM” NO. 1 MOST ADDED SINGLE,
76 REPORTING STATIONS SPINNING THE SONG ACROSS AMERICA 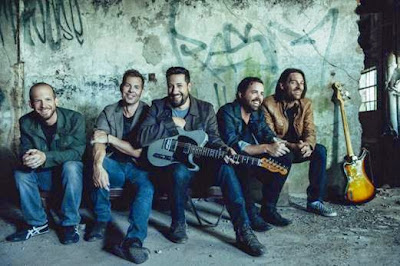 Nashville, TN – RCA Nashville’s own, Old Dominion, has taken Country Radio and America by storm with their debut single “Break Up With Him.” This week Old Dominion’s first single was the No. 1 most added song at country radio with 42 new playlist “adds” and 76 first week reporting stations spinning the song by the band Rolling Stone Country, Billboard, Country Weekly and the Huffington Post agree are a “band to watch.”

The support that Country Radio has shown us out of the gate like this is unreal,” says Old Dominion. “We are so proud of this song and the entire team of people who are working with us. We can't wait to see where this will take us!”

“What a great start to BREAK UP WITH HIM! It really shows the excitement Country Radio has for this song AND this band,” announces RCA’s Senior VP/National Promotion, Keith Gale. “We appreciate all of our partners at Country Radio who were a part of this historic start to Old Dominion's first single for RCA.”

Clint Higham with Morris Higham Management, Old Dominion’s artist management adds “It's so wonderful to see when good people win. Old Dominion possess all the qualities of amazing musicians, artists, writers and performers, but they are even better human beings and I speak on behalf of everyone involved on the team that they make it exciting to come to work every day . We are thankful to our friends and partners at country radio who are seeing it too and seeing the fans embrace the music.”

“Break Up With Him” was written by all five band members; lead singer Matthew Ramsey, multi-instrumentalist Trevor Rosen, drummer Whit Sellers, bassist Geoff Sprung and lead guitarist Brad Tursi, making the first song that the band has written together as a collective group.

It is also of note that the Old Dominion band members have other songs on the radio charts currently that they’ve written, including Blake Shelton’s “Sangria,” Tyler Farr’s “A Guy Walks Into A Bar,” and the recent Dierks Bentley hit “Say You Do.” In addition to the hit songs currently/recently on the charts, Old Dominion band members also wrote “Better Dig Two” and “Chainsaw” (The Band Perry), “Come Back To Me” (Keith Urban), “Wake Up Loving You” (Craig Morgan) and “Save It For A Rainy Day” (Kenny Chesney) to name a few.

Old Dominion has toured together for over 8 years and show no signs of stopping. Currently, not including solo headlining shows, they’ve joined Kenny Chesney for a run of 18 stadium tour dates on The Big Revival Tour to take the band through August.

With the amount of time Old Dominion spends on the road it was no wonder that “Break Up With Him” was penned there as well. With the beginning melody of “Break Up With Him” being laid down one day at a sound check, lyrics coming together in the band’s van and then being finished in a cabin down in Texas, Old Dominion proves they know how to write and perform.

Posted by LovinLyrics at 2:37 PM