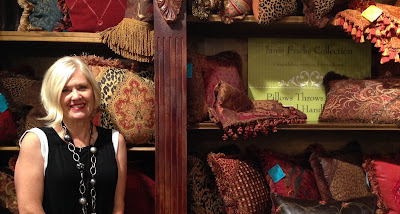 DALLAS, TX (July 2, 2015) – Janie Fricke, a two-time “CMA Female Vocalist of the Year,” past Grammy nominee, and a voice of some of the most recognizable advertising jingles ever, has yet another passion, textiles and fabrics.

The Janie Fricke Collection is a line of fine home accents, whose fabrics are personally selected and cut by Janie herself to create one of a kind designs. Janie has turned her life-long knowledge of fabric and sewing skills, a family tradition, into the Janie Fricke Collection. This specialized high end brand of products includes decorative pillows, throws, table runners, seasonal items as well as a line of customized “bling” items that she terms “ranch chic.”

“My mother and grandmother sewed so I've been doing this since I was very young,” says Fricke. “They never really taught me but I just watched and started to pick up on it, and have always made my own designs. I've made things for friends and family for years but someone pushed me to start my own collection and it’s turned into a second career.”

JFC is carried in specialty boutiques around the country and is showcased in the Dallas, TX showroom Touch of France, located in the prestigious Dallas World Trade Center. Items are available at JanieFricke.com for retail and wholesale market buyers. With the popularity of her line, Janie has recently launched janiefrickecollection.com specifically for professional interior designers highlighting her products and fabrics.

“Touch of France has been a great place to showcase my goods, especially during the Dallas Total Home and Gift Market which begins June 24, 2015. Buyers from all parts of the country converge in Dallas to purchase goods to supply major retail outlets. I am constantly working juggling my music career and working on this line of home goods,” continued Fricke. “I've always been a performer so building this whole other business on top of that has been a challenge but it’s great to share my other creative outlet.”

Raised on a farm in Indiana, Fricke began singing in church, and later turned that talent into a career which began as one of the marketing industry's most successful jingle singers. Long before her success as a country artist, millions of people became familiar with Fricke’s voice through ads for United Airlines, Coca-Cola, 7-Up, and Red Lobster. She soon became a session singer where she was singing background in the studio with some of the biggest country stars of the late 70’s and early 80’s, including Loretta Lynn, Eddie Rabbitt, Crystal Gayle, Ronnie Milsap, Barbara Mandrell, and Mel Tillis.

After a string of duets with such greats as Merle Haggard and Moe Bandy, Fricke landed a solo recording contract in the early 80’s and scored several hit singles, including “Don't Worry 'Bout Me Baby,” “He's a Heartache” and “You're Heart's Not In It.” She won CMA’s coveted “Female Vocalist of the Year” in 1983 and ’84 and has been nominated for three Grammy Awards. She has been credited with over 1,600 album projects and scored 36 hit singles.

Posted by LovinLyrics at 4:34 PM