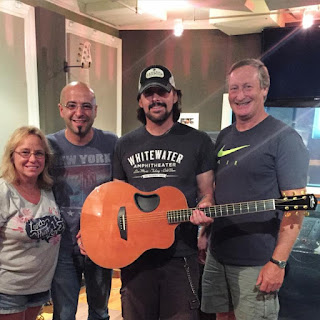 World traveler, charity supporter and hard-rockin' country dynamo Rick Monroe has signed an endorsement agreement with McPherson Guitars.
Specializing in state-of-the-art, hand-crafted acoustic guitars, McPherson Guitars is headquartered in Sparta, Wisconsin.  "We choose only a limited amount of artists per year to join our family," says Larry Klenc, General Manager/Artist Relations, McPherson Guitars.  "Rick is a special talent with a long musical career ahead of him.  We're proud to add this talented artist to our team."

Having clocked thousands of miles on stages around the world, Monroe insists on playing only the instruments that are best suited to his sizzling live shows.  Now he has found what he was looking for.  "It's an honor to be part of the McPherson family," Monroe says.  "Some high-end guitars are compared to high-end cars like Maseratis or Bentleys.  But McPhersons are in a completely different league -- I'd say it's more like a G5.  The way it plays, the sustain and sound are unparalleled.  I look forward to making music with my amazing guitar."

Though relatively new to the national spotlight, Monroe has already made a sizable impact.  His current single, "Great Minds Drink Alike," is rising in both the Billboard Indicator and MusicRow charts.  And recently he was selected to the Jägermeister Presents: Lee Brice Country Concert Series as the brand ambassador and emcee for the seventh consecutive year; no other artist has enjoyed as long a run on the tour.  The multi-artist tour runs September 11 through October 24.

Posted by LovinLyrics at 1:12 PM