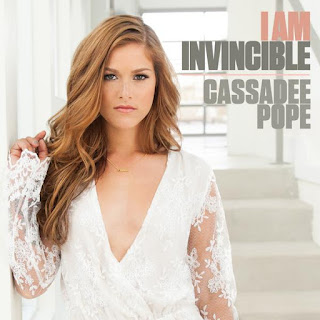 Purchase "I Am Invincible" on iTunes

Cassadee Pope of “The Voice” fame has released her newest single “I Am Invincible.” It’s a tour de force about a girl that refuses to be defeated. A call to arms reminding women that we are fighters and survivors. It starts out saying exactly that “For my girls, the fighters, the warriors,” There have been times that have tried to break her, but she’s come out on top, less scared, more scarred and ready to go. There’s nothing that can shatter her, though at the time it may have seemed like she was down and out. A very inspirational song that anybody can draw from. Whether it be a pre-workout song to get you pumped or just a song that you crank up when you hear it on the radio, it is definitely one to get you up and going. In addition to the lyrics, is there really anybody that’s not going to turn it up when they hear Cassadee’s voice? She flourished on “The Voice” for a reason and that reason is readily apparent here. With previous songs such as “I Wish I Could Break Your Heart” and “Wasting All These Tears”,  Cassadee has displayed struggles and heartbreak but this is the first time she’s shown that she’s come out on the other side stronger and ready to kick ass. Every time something in her life tried to get her down, she dealt with it and she wrote about it and now all she’s saying is there is nothing you can do to hurt me anymore because “I Am Invincible.” A great message to anyone who’s ever struggled, there is a light at the end of the tunnel and you can show up stronger than you were. Let nothing break you and be not afraid to show your scars, it at least worked out well for Cassadee in this situation because I can’t see her doing anything but absolutely dominating the stage, the airwaves and whatever else she sets her sights on!