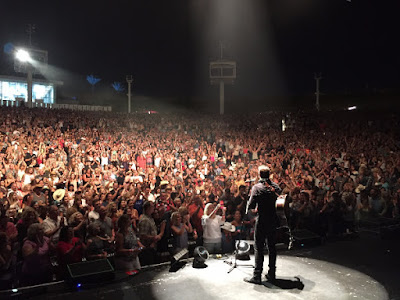 Not only is Chris Young, one of “country music’s strongest, most distinctive voices” (Billboard), experiencing the strongest sales of his career for his steamy new single, “I’m Comin’ Over,” he’s also witnessing his biggest crowds to date! Over 8,000 cheering fans turned out for his sold-out show at the Pacific Amphitheater in Costa Mesa, California over the weekend.

“Chris Young impresses a sold-out Pacific Amphitheater…the energetic entertainer is very charming and knows how to work his crowd… with enough content to create an entirely radio hit-filled hour-and-15-minute set, Young didn’t waste much time getting his fans going,” declared the OC Register.

OC Fair talent buyer Lisa Sexton shared, “the show was incredible…one of the best of our season!”

Young kicked off the weekend’s run in Costa Mesa, CA, followed by shows in Tacoma, WA and Brownsville, OR. Chris has quickly become a consistent headliner, selling out shows over the last year with a hit packed set including chart-toppers “Who I Am With You,” “Tomorrow” and “Gettin’ You Home.”

On October 22, Young will ignite his headlining “I’m Comin’ Over” Tour in Savannah, GA with tourmates Eric Paslay and Clare Dunn. Tickets are on sale now at chrisyoungcountry.com. His newest album, I’m Comin’ Over, will release later this fall.
Posted by LovinLyrics at 10:39 PM